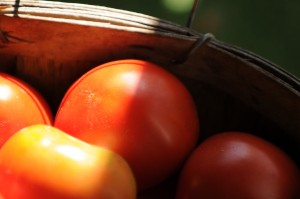 My cousin Di has Facebook now. When we were kids we saw each other regularly. We have our own families now and our own lives so we only see each other when someone dies, which is very sad. It was good to connect on Facebook. I scrolled through her pictures. We look a lot alike. We could pass for brother and sister. I read her interests. One of them made me smile. She has always been a bright girl, quick-witted and verbal. Even as a child she would commonly read an entire book in one day. She is a neo-natal nurse practitioner so she is a competent professional, but she still has a very simple, common interest that she inherited from our grandparents like our sharp, pointed noses – she likes growing tomatoes.

Growing tomatoes has always been a big deal in our family. My grandparents survived the Great Depression and they were devoted gardeners. They grew bell peppers that grandpa always called “mangoes.” They grew wagon-loads of seet corn. They grew wonderful green beans and cucumbers – (They always called them pickles, even though I don’t remember them pickling many of them). But the memory I cherish most is the memory of garden-ripe tomatoes. They were just plain champion tomato growers. The kitchen window was always lined with big, juicy, beautiful, red tomatoes.

Grandpa would grab a salt shaker and sit down for lunch and eat tomatoes like apples. Our part of Ohio was perfect for perfect tomatoes. They were so common and abundant when I was growing up that I had no idea how rare and wonderful they were at the time. I long for real tomatoes to come into season.

If you bite into something that looks like a tomato and juice doesn’t run down your arm, it’s probably synthetic. It’s not a real tomato. Real tomatoes are grown by real people in real places with real dirt and real water and real sunshine and real care and they are real good – real, real good. There really is no substitute for real tomatoes.

Zach, a man in our church, has an impressive truck-patch garden on a few acres behind his home. He and his family are very diligent people. Our son Daniel has worked for them this summer. One of the wonderful fringe benefits of his job and been occasional produce from Zach’s farm. This week he came home with a beautiful basket of real, red, ripe, perfect tomatoes. Saturday we had bacon, lettuce and TOMATO sandwiches.

When I pull a burger off the grill on a warm summer evening I don’t want to ruin it with a slice of insincere tomato-like product. I want a real, honest-to-goodness slice of red, ripe, juicy â€˜tomatoness’ on that thing.

Have you noticed that there are “Christians” and then there are Christians. Sometimes you meet professing Christians who have that same “real tomato” quality of sincerity about them. You immediately get the feeling that you are with an honest, genuine, open follower of Jesus Christ. They look you in the eye. Their smile is real. Their words are sincere. They do what they say. They’re honest. I hope people find me to be a “real-tomato” kind of Christian. The real thing, not some “hot-house variety” type of Chrisitan. I don’t want to be slick and professional and distant with people. I don’t want to be plastic and produced. I don’t want to be “canned” and full of hollow talk and clichés. I want to be the real dirt, real sun, real rain, home-grown, down-to-earth and rooted in Christ kind of Christian that only the Spirit of God can produce over time. 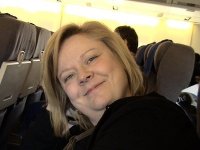 P.S. Holly wanted me to tell you that she made the BLT’s. (They were good)

Holly and the Evangel Choir