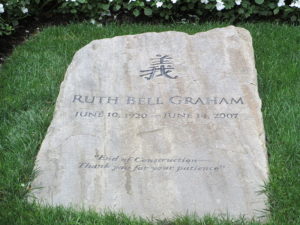 I was speaking at camp a couple summers ago and I told a story about Ruth Graham, the wife of world-famous evangelist, Billy Graham. For effect I withheld the name Billy Graham until the last line. The students really didn’t seem all that impressed with my story. In the lunch line a bit later I discovered why. A young camper came up to me with lines in his forehead and said, “Now who IS Billy Graham?” Most of the campers that week had been born since the year 2000, so few of them knew who Billy Graham is.

Billy is now over 90. His wife Ruth died in 2007. She was a dynamic Christian. She accomplished a great deal and wrote beautiful books and poems from her log home in the mountains of North Carolina. She personally planned and supervised the construction of her mountain home and had it built from local stone and logs. She named it Little Piney Cove. Everyone who knew her agreed she was a remarkable woman. Billy would frequently say she was a much greater Christian than he.

He has written a wonderfully biographical book called Nearing Home. In the book he tells about what Ruth chose to have written on her tombstone. Her grave stone is simple and rough. None of her accomplishments are listed there. The epitaph is from a road sign she once saw. It simply reads “end of construction–thank you for your patience.”

You may have noticed, people can often be quirky and irritating, even Christians, even the best of us. The people that you love the most will test your patience, bush your buttons and get under your skin. Today, when you are tempted to be impatient with people imagine a sign hanging around their neck. “Under Construction.”

The Apostle Paul wrote a letter to a small Jesus group in Macedonia, in the City of Thessalonica. Closing the letter he penned these simple words, “…we urge you, brothers and sisters, admonish the unruly, encourage the faint-hearted, help the weak, be patient with all…” (1 Thess. 5:14)

Remember, you are under construction too. Thank you for your patience.