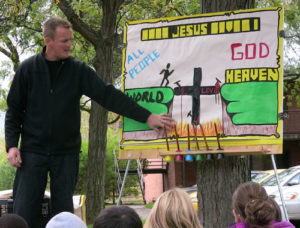 A man is standing on the corner where the traffic comes to a stop. He is holding up a Santa doll. He has a sign–“Santa is Satan.” He is scowling at everyone in general. He’s shouting at the traffic. His breath forms a little fog cloud in front of his face. He’s demanding repentance of the shoppers.

“If you tell your children there is a Santa, you are a liar. Hell is for liars. Consider your ways. Repent.”

Watching him my impulse is to roll down the window and encourage him to repent for confusing people about the gospel out there in front of Taco Bell.

A Right Way and a Wrong Way

If we were to compare doctrinal statements, I’m sure they would be similar. It wouldn’t surprise me if the fellow is a fellow Baptist. I’m all for witnessing in public. I admire his courage. I’m not against street-preaching. Open-air public proclamation of the gospel has a rich and honorable history. Jesus did it. Paul and the apostles did it. Faithful preachers down through human history have done it. My hero Charles Spurgeon did it and taught other to do it.

I have a friend, Brian Harmon (pictured above) who is a missionary with a group called “Open-Air Campaigners.” He goes where the people are. He preaches in parks and public places. Though he has opposition and sometimes heckling, his manner is kind and loving. He doesn’t use hateful placards. He doesn’t pelt people with “gospel rocks.”

When I was a student at Moody fellow students had an active Street-Preaching outreach. They were creative and engaging, but they did not verbally abuse and attack the public. They were ernest, but they joyfully proclaimed the gospel as the good news it is.

Google-up some videos of Ray Comfort’s faithful public ministry. He is often able to draw people into sincerely considering the truth of the Gospel with a series of pointed questions. In Greg Laurie’s biography Lost Boy, he tells of how, before he knew the Lord, he would listen to the open-air preachers from out at the edge of the crowd. This was in California during the Jesus Movement. He would gather their pamphlets and take them home and read them in his room. Eventually he came to faith. He now conducts evangelistic meetings with thousands in attendance in public stadiums.

All that said, I don’t think Jesus would do what the good man with the bad attitude on the corner was doing that last weekend before Christmas.

Don’t kid yourself, Heaven and Hell are Life-and-death matters. Nothing is more serious or sobering, but still folks, keep in mind–the gospel is good news. It’s Christmas folks. This is a happy time. It’s a time for carols and feasts and giving and reunions and love. It’s a Christian time. People go to church, they give gifts. They sing songs about Jesus. Don’t scare them off. Introduce them to the One they are singing about. Be a witness. Be a public witness and when you do, please, be a smiling witness.

Joy is evidence to the world that God can fully satisfy the human heart.

Please Listen to This