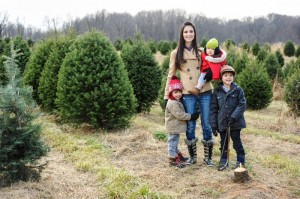 This photo is our our Grandbuddies and their mother Elizabeth. This is a classic re-post from 2003

About fifteen years ago when the Christmas season was approaching weather reports predicted a heavy snow on Thanksgiving eve. At the time I was the pastor of a village church in Ohio. On Thanksgiving Eve we joined with the other village church for a Thanksgiving service. Lois was in Newark shopping for the day. I was concerned that she would not arrive in time for the service. As night fell snow began to fall, too. Thick, wet snow. Festive as it was dangerous.

This was before cell phones. I had trouble concentrating on my preparations for the service wondering about her, but finally I heard her sound the horn in the drive and I knew that she had arrived home safe. I went down to greet her.

She was wearing a long winter coat, a hat and scarf, but what you could see of her face was glowing with excitement. Her cheeks were red in the cold wind. There was a child-like light in her eyes.

We went around behind the van and opened the doors. The entire back end of the van was filled with an enormous wreath. It was huge and fragrant.

“It was half-price,” she chirped.

I imagined it was still plenty and I didn’t want to mess with it until after the service. I am ashamed to admit that I squandered an opportunity to enter enthusiastically into my wife’s plans. She was undaunted, insisting that I get it in the house for her so she could wrap it in lights.

“Oh, hurry,” she bubbled. “You have to get this inside before the service. The family is coming tomorrow for Thanksgiving and I want have that wreath on the house when they arrive.”

“Where are you going to hang it, it’s half the size of the garage doors?”

“I can’t hang it. You have to help me. It has to go between the windows over the garage doors.”

I refused to help until after the service and then it was too wet and to windy and too cold. It would never have been used if the next morning Lois had not insisted that I do nothing else until I hung that wreath. I told her it was impossible. I told her that if I extended the ladder to it’s full height and stood on the very top rung I would only then just be able to reach the gable of the house over the driveway. She said she knew I could do it. She offered to hold the ladder. I found that only mildly comforting.

With trembling hands I stood on the top rung of the ladder and screwed an eye-hook into the soffit high over the drive. I strung some wire thought the eye. I descended the ladder and with the children watching and cheering ascended with the huge wreath. Finally success. The wreath was in place. I put the ladder away and calmed my wildly beating heart. It was a sight! I got it in place just minutes before the family started arriving for Thanksgiving. I enjoyed hero status for a moment that day.

I have in my memory a photo of that wreath twinkling with lights, high on the house. At night you could see it across the countryside for miles. If you offered me a hundred dollars to take that memory from my mind I would turn you down without hesitation. The older children still remember that wreath on the house almost as big as a car.

One way to stay young at heart is to act like a child at Christmas, to enter wholeheartedly into the preparations for the season. Think of it. Just for a moment our busy, burdened, self-absorbed culture pauses at the cradle in wonder. I don’t want to miss the opportunity to celebrate in a big way. I would hate to think when I came to the end of my life that I allowed my heart to get so cold that I lost my childish Christmas joy and used maturity for an excuse.

Peter Marshall once preached, “Let’s not succumb to the sophistication that complains; “Christmas belongs only to the children.” That shows that you have never understood Christmas at all, for the older you get, the more it means, if you know what it means. Christmas, though forever young, grows old along with us. Have you been saying, “I just can’t seem to feel the Christmas spirit this year? That’s too bad. As a confession of lack of faith, it is rather significant. You are really saying that you feel no joy that Jesus came into the world… you are confessing that His presence in the world is not a reality to you. Maybe you need all the more to read the Christmas story over again, need to sit down with the Gospel of Luke and think about it.”

This afternoon I am going to light a candle and brew some tea and scoop little Hope America into my lap and see if I can get her to sit still there for a few minutes while I read her the story of Jesus birth from Luke chapter two. Maybe she will ask me some questions or maybe she will just fall asleep in my lap. It doesn’t matter.

A Christmas Gift From Heaven