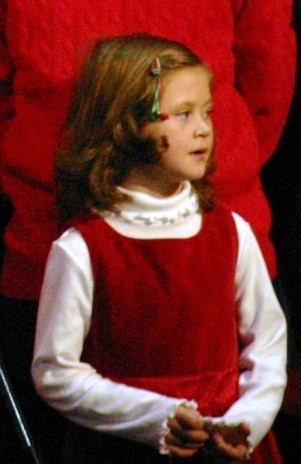 I’ve always enjoyed going to the in-laws for Christmas. Some years they seem tolerant of me, too. Mostly I think they just want me to get Lois and the kids and the presents there and then stay out of the way. I have really never been very good at keeping out of the way. I am an “in-the- way” kinda’ guy. Around the holidays I always resolve to try real hard though.

One year we all were gathering for Christmas in Berea, Kentucky at the beautiful home of my sister-in-law Lavonne. The place was all decorated the food was abundant. There was a beautiful covering of snow on the ground. That doesn’t always happen in the Bluegrass.

Feeling a little like the Christmas chauffer I tried to think of ways to make myself useful. My brother in law, Bob already had the remote so that was covered. Even though I am type-cast for Santa, what with being jovial and all, the kids had already claimed that job. I was going to volunteer to walk the dog but he always snarled at me, so I was just sitting over in the corner when an idea hit me like a snowball in the face.

I overheard my sister-in-law say, “Does anybody know how to get the garbage disposal to run? It stopped.”

Now this is something I have some experience with. We had a garbage disposal once with a mind of its own. It would work just fine and then suddenly get stubborn on us and just go on strike. I discovered that if you took a broom handle and jammed it into the drain it would sometimes free the thing up and it would run again.

I found the little reset button on the thing and did my deal with the broom handle. Everyone looked on with what I now realize was mild amusement and toleration falling far short of the admiration I was seeking.

But when I worked my plumbing magic that thing purred to life. I made my way back to the corner to bask in the glory of my new status with the in-laws. After years of mild toleration bordering on rejection I had finally earned a place by the fire of acceptance. It was wonderful. and I nearly drifted off into a happy drooling sleep when I was awakened by a shriek from the kitchen.

“Get a mop, there’s water running all over the kitchen floor. My new house will be ruined.”

My sister-in-law shouted at my wife, “What did Ken do? There’s water all over the floor. My house is ruined. Why did he have to do that?”

Lois doesn’t mind letting me know when I have done something wrong. I think she rather enjoys it, but she doesn’t much like other people piling on. Lois and her sister exchanged tense words and I watched my momentary hero status melt away like a snowball in the sun. I felt like a dirty gray snowman in March. I tried to be inconspicuous but everyone kept “looking” at me for what I had done.

It didn’t make it any better when I suggested it wasn’t my fault.

I said, “The plumbing was already rusted out.”

“It’s practically a brand new house, the plumbing can’t be rusted out yet,” someone said.

My airtight logic gained me no more appreciation than my plumbing skills.

We passed the rest of our festive holiday in quiet toleration. After what I understand was spirited debate I was invited back the next year for Christmas, but on probation. I brought my wife and children and a car load of gifts and when I arrived at the door I said, “Merry Christmas, and I held up a huge pipe wrench and said, “Not to worry, I brought my own tools this year.”

The dog snarled. My sister-in-law glowered. My mother-in-law sighed. My brother-in-law clutched the remote to his chest and my wife just pointed back out toward the driveway and said, “Here, give me the presents. Why don’t you just wait in the car until it’s time to go home.”

I suppose, to be honest, most of the abuse I described from my in-laws was in my mind. If you are committed to spreading Christian cheer at Christmas time, your best intentions will be misunderstood by some. Don’t be discouraged. It happed to the Lord Jesus himself it will happen to his followers, too. He came all the way from heaven to earth to save sinners, the very ones who were eager to crucify him. Misunderstanding is an inevitable part of life.

Maybe you will find that a comfort while your sitting out there in the driveway this year.