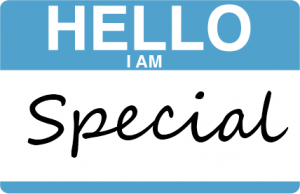 Gideon is a little fellow in my church who is afflicted with Downs Syndrome. The first time I met him I reached out to shake his hand and he looked a little frightened or confused. He hid his face in his mother’s lap. Eventually he got used to me and within a few weeks he would put out his hand the moment he saw me coming.

A couple years ago he was involved in the Christmas program. During the program the introduction began to play and the children walked to the front dressed as Christmas packages. Each child waddled up the aisle and climbed the steps to the platform with their legs and arms sticking out of a box wrapped in Christmas paper. A bow sat on the top of each child’s head.

They were well rehearsed and sang beautifully. The last song was a little number I think titled “I’m Special” At the end of the song the children were coached to shout out all together; “I’m special”. The song ended and all on cue the children shouted; “I’m special” and the song ended. The crowd laughed and applauded. The children were then to file off the platform and make their way back the aisle to sit with their parents for the rest of the program.

Things quieted for a moment as the children started to leave the platform. In the quietness of the moment Gideon looked out at the people, a big smile lit his face, and with a clear voice that carried all over the auditorium he shouted; “I’m special.” There was a smattering of laughter across the crowd.

Another second or two of silence followed and then Gideon said it again loudly and clear: “I’m special.” It was if he expected a reply. His teacher helped him off the platform. The crowd grew thoughtful and quiet. Half way back the aisle he said it again and then again as his mother gathered him into her arms. She warmly said, “yes you are Gideon, you are special.”

It was the line Gideon repeated over and over that still lives in the hearts of everyone who was there that night. We didn’t think to choose little Gideon for the lead part in the Christmas program, but God had other plans.

Little Gideon was named after a man who was used of God to deliver Israel during difficult times. When God chose Gideon to be one of the judges Gideon was cowering for fear, but God called him a mighty man of valor. God is like that. He chooses and uses people we tend to overlook. He inspires unlikely people to accomplish extraordinary things. Come to think of it that is what he did the night Jesus was born.