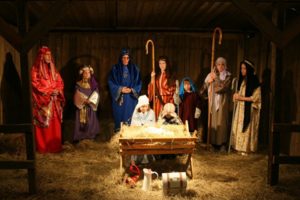 Christmastime is a challenge for Pastors. I always try to think of new ways to package the old Christmas traditions and the eternal gospel so the truth of it will ring clear and fresh in the hearts of people all year long.

Years ago I sold the young people of the church on doing a live nativity scene. We wanted the community to enjoy it. We planned the live nativity for the night of our annual Christmas Candlelight Service so worshippers could see it as they came to the service. When the night came our village church shone with light from within through stained glass windows. Hundreds of luminaries lined the walks and outlined the parking lot.

Christmas carols the most beautiful hymns of Christendom rang from within the little chapel. The kitchen and fellowship hall hummed with life. Ladies of the church like the devoted Magi themselves came bearing their favorite Christmas cookies. The coffee was on to brew the fragrance spilled over into the chapel. I joyfully presided over this orderly kingdom. Prelude music began to play- house lights would soon dim leaving candlelight playing on the glass and polished wood of the pews. Everything was perfectly in place.

Suddenly one of the children burst through the door red-faced with excitement. “Pastor, come quick- one of the sheep got away.”

I should have delegated the task but I followed everyone out into the night. The frightened animal first sought refuge in an open garage near the church. One of our men- had the sheep cornered for a moment but then he tripped over a lawn mower and the sheep got away.

Frantic, the animal then shot across the road into the cemetery behind the Methodist Church. Mary left her doll and gave chase. Her twelve-year-old husband Joseph followed losing his beard and the bath towel that had been wrapped over his head. Wise men dived at the runaway sheep without a hint of dignity-card board crowns rolling in the snow.

The shepherds were quickly exposed as the imposters they were. Worshippers arriving were treated to an amusing display. Traffic clogged in front of the church. Finally, mercifully, one of the men valiantly dove and tackled the sheep toward the back of the cemetery. He wrestled it into the back of Mike Hammond’s pickup truck.

The service began on time though there was a buzz of excited amusement. Our intent was to stimulate reverent thoughts. We succeeded in amusing everyone but came well short of inspiring anyone. The service itself was lovely and orderly with no live animals and no surprises. At the end the room went dark and one by one the people lit one another’s candles. Families stood together and sang. Children’s faces were bathed in candlelight. After singing I stepped from the platform as I did every year and began to dismiss the congregation a row at a time, warmly wishing each of them a Merry Christmas and meaning it deeply. The candlelight glowed on each face and flickered in their eyes as each of them returned the loving greeting.

Finally the auditorium emptied and with my candle still burning I stepped out into the night. I stood and watched until the last car drove away and I was left with my candle on the front steps of the church in the quiet. I hated to put out my candle. The moon and stars sparkled on the snow. A few hours before it was a noisy scene of chaos, now it was silent, peace restored.

At Christmas time our best plans often erode into chaos and confusion. When that happens to me I try to quiet my heart and center my affections on Christ. He is the Prince of Peace and he has a powerful way of restoring order and tranquility where he is welcomed. May the Prince of Peace rule in your heart and in your home this Christmas.