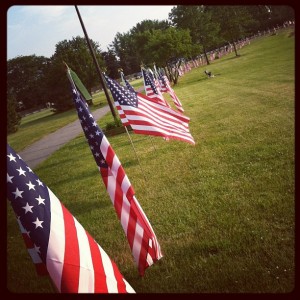 It’s the time of the year families take vacations. In the mid-seventies Dad and Mom created an enduring memory for us. We would take a loop through the Smokies and Washington D.C. on a camping vacation. We would visit some Christian colleges. We would take in historic sites along the way. We would picnic out of a cooler. We would spend every night in our cabin tent together. The big Chrysler held six. Mom and Dad in front. One child in between. Three across the back. Our family of three sons and one daughter was a car-full.

Toward evening we would begin to watch for camp-site billboards. In the back seat we campaigned for a camp-ground with a swimming pool. It was a beautiful week. Most of the camp grounds had swimming pools. We tired ourselves out swimming until the pool closed and then we would all lie snug in our sleeping bags and listen to crickets and the wind in the trees as we drifted off to sleep. One evening in the mountains our site was along a creek and we fell asleep to the music of water over rocks.

One night we were camping in a small town somewhere in Tennessee. We broke camp early in the morning. Dad said we would have breakfast after we got a few “miles under our belt.” Within an hour we topped a rise in the road and rounded the bend into an idyllic village. We stopped the car and got out to stretch. Mom began to spread out our breakfast on the hood of the car. A grandfatherly man appeared from nowhere.

“Are you on vacation?”

“Thank you. It’s a beautiful state.”

The gray-haired man pulled a ring of keys from his side and said, “Don’t eat out here. You can use our Town Hall. There are rest-rooms and a nice table. Can I make you some coffee.”

I would have been more comfortable staying there with the car. We lived in a suburb of a major city. People there were human and kind enough, but they kept their distance a bit more and we were not used to such overt hospitality. Dad, I’m sure feeling the same but knowing to that a refusal would be impolite, immediately accepted the offer of the stranger. We enjoyed our breakfast around a table in the town hall making small-talk with the kind old man.

Soon we were on the road again idling through other mountain towns with their halls and churches and schools and hospitable people. We had experienced the gentle touch of civilization. We drove away with the warm feeling you have whenever you are touched by human civility. I’ve learned that it’s a feeling worth seeking.

In the Gospel of Matthew the story is told of the time when Jesus sent out his disciples and gave them special power over sickness and spiritual oppression. He told them to herald that the Kingdom of Heaven was at hand and offer their help freely to anyone who showed them hospitality.

You really never know what will happen when you exercise common civility and extend simple hospitality. The Epistle to the Hebrews says sometimes in showing hospitality to strangers people have entertained angels without knowing it.

Who decides how long American civilization will last? We do. Every day.

Slaughter of the Innocents