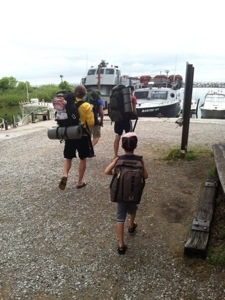 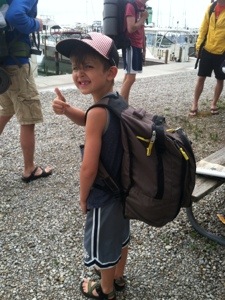 Monday was a difficult day but that’s a story for another time. Tuesday we spent the day making our way around the north end of the island. We hiked from Crescent City around to the eastern shore by dark. It was a difficult day. It started in fog and ended in rain. It included comedy tragedy and quicksand. It was hard slow going. The north shore is not good hiking. It’s almost all rocks and stones–tough hiking in good conditions and conditions were not good.

The evening was beautiful. It was cool with stunning cloud formations out over Lake Michigan in the west. The beautiful clouds would bring a bit of ugly weather a little after nightfall. It took us ten hours to get from just north of the site of Crescent City to the northeast corner of the Island. My foot was injured and I hobbled almost every step of the way. The other guys took turns with my pack.

About a half hour before dark I told the guys to go ahead without me and make camp. I didn’t eat the first night. all of us had worked up a pretty good appetite by now. I imagined the luxury of a warm meal and the comfort of my sleeping bag and kept moving forward as the guys went around the bend of the island out of sight.

I made my way step-by-step forward on the stones careful not to turn my ankle. The birds called. The waves lapped rhythmically on the shore. The blue lake lay out to my left. A high sandy bluff toward up on my right. There were a few places where stones gave way to short stretches of sandy beach. I loved those spots where, for a minute or two I could walk along on the hard sand where the water met the shore, but there weren’t many of them. The sun set behind me. In the afterglow I walked on. A nice breeze was now at my back.

I had strapped a bright yellow umbrella chair to my backpack. Sitting out on a point ahead well after dusk I could see the yellow chair waiting for me. The boys had left it behind for me there with a nalgene bottle of water. I stopped to rest just for a minute and drank some water and then poured the water out and made my way along the beach south toward camp. I could tell the rain was coming and didn’t want to get soaked so I kept moving. A few minutes later in the darkness ahead I saw a light coming up along the shore. It was Daniel with a headlamp running to meet me. When he reached me he told me they had made camp. It wasn’t a good camp but it was camp and we should hurry to get there before the rain came. We hurried along the shore as much as I could hurry and I arrived just before the the rain began to fall hard.

We set our tents up close together. There would be no dinner but we hoped we would have a dry place to sleep. We prayed and tried to make a comfortable “nest” in order to sleep, but I think our tent was pitched in the darkness over a fallen tree. Dan, Wes and I shared a tent. In the next tent were Kyle, Kyle Kenneth, and Chuk.

Kyle said; “Do you guys have any water?”

I had ignorantly poured out the last of the water so I could strap an empty bottle to my waist and use my free hand to use a walking staff.

“Don’t worry about it Kyle. We don’t need any water. We’re good. If you go out and purify water now you will get soaked and you will be cold all night.”

In five minutes I heard him zipping himself back into his tent then I overheard a tender conversation with little Kyle. He is five and he trudged along without complaining hour after hour wearing his “man week hat” and playing with his knife. He was spent and had fallen asleep.

“Kyle, Kyle, wake up little buddie. Hey son, I have your water for you. There you go. I love you.”

At the End of the Parade