I have always loved Canada Geese. I think they are beautiful birds. I love to stand outside on a cool autumn evening and listen to them honk by low overhead. I love to see their silhouette pass before an autumn moon. I’m not sure geese feel the same way about me.

A few weeks ago we were in the Upper Pennensula at our Northwoods Conference Center. Every morning I ran the four-mile route around the lake. I always kept alert for wildlife while I ran through the woods. One morning I saw some Canadian Geese ahead of me on a land bridge. I thought they would retreat as I approached. There were three or four of them. All but one of them made way for me, but one circled around beside me and began to hiss.

Unfortunately I was unable to communicate my admiration for him. At first he hissed and charged at me with his head low. Then flapped his large wings and flew at me about face-high. His wing span was at least four of five feet. I was a little to busy fleeing for my life to get and accurate measurement.

It was a little scary. Up close he was a very big bird and even though I am at least a hundred and sixty pounds heaver I don’t have the advantage of flight. I went through a series of threatening gyrations and guttural noises calculated to intimidate the bird back into the wild. Certain I was safely past the bird I ran on– my adrenalin spiking my pace. Then I saw movement in my peripheral vision and heard the hissing noise again. I turned and the angry goose was flying at me again about face-high. By the time I was a safe distance away my heart was racing from the encounter.

Running is a wonderfully solitary thing. You are alone with your thoughts and mine were troubled. I respect and admire geese. I consider them beautiful creatures of God. But in one of my only encounters up close I was attacked like an enemy. I was not sure why.

When I came home I did some research to understand what my goose friend was so angry about. That’s when I realized that he didn’t understand me and I didn’t understand him. I was harmless but he saw me as a threat. They say the males stand guard over the nest. He was protecting his family. If he knew me he would have realized that is a quality I admire. Geese mate for life, another admirable quality. He had no way of knowing that I was no threat. I was a friend who was excited to see them.

It reminded me of the angry people I have known. We all have angry people in our lives. We always will. They are often people to who will have a profound influence in our lives. Sometimes they are in our own family. They are people who’s influence upon us will still be felt long after they are gone. The twist is that angry people are often people that we like and admire. But for whatever reason, fear or misunderstanding, they wouldn’t let people get close to them.

I try not to let that discourage me from seeing the admirable qualities in people or their potential when God is at work in them. They say people who hurt others are hurting people. I don’t intend to change my mind about geese or angry people even if they are hard to get close to.

This is an amazing story

I guess I’m not the first to be attacked by an angry goose. The folk from the Buckeye state have put together a very helpful pdf on the subject. I read it and realized that I did absolutely everything wrong.

This is fun, too. 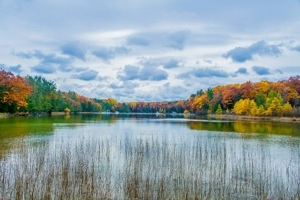