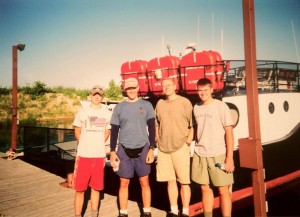 Last summer we went on an adventure. On the evening of July 3rd headed north along the west coast of Michigan to the Lelanau Peninsula. Our destination was the quaint little village of Leland. On the morning on July 4th we would take the ferry to North Manitou Island for a three day hiking and primitive camping adventure.

I was joined by our two oldest sons, Kyle and Chuck and an experienced backpacker, athlete and outdoorsman from our church, a fellow by the name of Mike Oatis. We drove north as night fell out over the lake enjoying fellowship and unbroken conversation about the things of the Lord.

Our hearts were all primed for the adventure and looking forward to being together with each other, enjoying the cold waters of Lake Michigan and the views from the western bluffs of North Manitou Island. Mike promised to hike in and show us Lake Manitou, a large interior lake on the Island. It was pristine blue, worth hiking in to see.

I had read a couple books on the history and natural beauty of the island. But we were all especially eager to spend some time with the Lord and enjoy fellowship with Him in nature. That was the primary purpose of our adventure.

We had everything we needed in our packs and a little more. The only thing we had not done was make reservations at a campground ahead of time. When we arrived in Glen Harbor and Leland all the campgrounds were full. I considered driving to Lake Ann to camp out on the grounds of a camp where I speak, but it was getting late. We could not find a single legal place to pitch our tent for the night.

Just past midnight someone suggested we check at the Sheriff’s Department. The deputies were courteous and eventually gave us permission to discreetly sleep over on the Court House lawn. We unrolled our sleeping bags on the sidewalk and went to sleep under the stars. I was so tired I went immediately to sleep and didn’t wake up until six-thirty in the morning.

I set up in my bag, pulled my knees to my chest and for just a moment enjoyed the quiet of early morning. Then I heard a hearty; “Good morning men,” and looked up to see Jason Hewlett, the deputy who we met the night before, making his way toward us with four cups of steaming coffee. “You men have a big day ahead of you. Thought this might get you off to a good start. Keep the cups, guys.”

We thanked him, downed the hot coffee, tossed our gear in the trunk, and headed for breakfast. Within an hour we were on the ferry growling out into Lake Michigan toward North Manitou.

We could have allowed our predicament to ruin the weekend but no one uttered a cross word. There was not a hint of complaint the entire adventure, even though there were hardships to endure. Hardships were expected. We all saw them as a part of the program.

There is a lot of talk about what to pack for an adventure and what to leave home to keep the pack light. I’m of the opinion the most important thing to pack when you are going on an adventure is a good attitude, a spirit of rejoicing. In the letter to the Philippians Paul said; “Do all things without complaining.” Later he said, “Rejoice in the Lord always. Again I will say rejoice.!”

Out in the wild a good attitude is the most important thing in your pack.

A Woman Alone on the Road