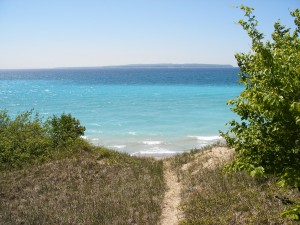 When we planned the North Manitou trip we planned only as much hiking as it would require to get to the west side of the island. Kyle and Chuk and I had such fond memories of it from our trip in 2001. None of us remembered the hike being difficult. We remembered the trail wide and level and easy—almost boring. When we were there last we hiked it fast. We were eager to make camp and enjoy a long stretch of very sandy, very beautiful, very private beach. We planned to have Kyle Kenneth along, who is five and even seriously considered bringing Oliver, who is three. Eventually Kyle decided to leave Oliver behind.

Since we didn’t expect much of a hike, we packed heavily toting along some luxuries; an umbrella chair, an extra stove, and more food than we could reasonably eat in a week.

If you have been reading these trail journals, you know that early in the trip we went right when we should have gone left and ended up in some real trouble. On the un-maintained trail loop there was a sharp climb. The ground rose to the left and fell sharply away toward the lake on the other side. At this point Kyle, Kyle Kenneth, Chuk and Wes had hiked on ahead of us. Daniel had stopped to help me around a fallen log so we were behind.

Climbing the hill I thought how awful it would be to lose my footing and tumble down the steep hill to my right. That thought was followed by another: how amusing it would be if I were to toss a log down the hill to make the others think I had taken a tumble.

At the same time Dan had the same thought, picked up a large log and tossed it impressively down the bank. It began to crash and roll and pick up speed and I made a series of guttural noises and grunts the way I imagine I would have sounded had I fallen down toward the lake.

Suddenly two heads appeared over the ridge from the trail ahead. Chuk and Wes had immediately dropped their packs and bounded back to help me. Daniel and I laughed until it hurt. Chuk and Wes were not even mildly amused. Within I was moved when I saw the concern on their faces. At the time I did not know how much I would depend on them just to get safely off the island.

By evening I would be in so much pain that I could not sleep and I could not walk. In the morning I still could not walk. We sat around eating breakfast trying to think of how to get off the island. We all really wanted the ride to be over. It wasn’t fun anymore. Our cell phones had no service or we may have made an emergency call. I knew I could not walk the rugged nearly six miles back to the dock. I had promised to be at Camp Barakel on Wednesday evening to speak for a week of camp.

It was a dreary morning. The weather matched our mood. The island was shrouded in fog and it was cold. We packed our things away and came up with a plan.

Someone said; “Let’s build a raft and float Dad out around the north end.”

For the next hour the guys gathered logs and driftwood and used paracord and our sleeping pads to fashion a very sorry-looking raft. The bottom of the lake on that part of the west side is sandy and level and slopes gradually out into the water.

For the next two hours we made slow progress. I was belly down on a raft half-submerged in very cold water, but I didn’t want to complain since the boys weren’t. Dan and Wes, wearing packs tried to guide the raft through the water around rocks. They had to wade deep enough for the raft to clear the bottom and shallow enough to keep from soaking their packs. That night they would have to share a sleeping bag because Dan’s was soaked helping me.

As we reached the northwest part of the island the bottom changed from sand to rocks the size of bowling balls and made wading impossible. We dismantled the raft and tried to build a sled to drag the packs so a couple of the guys could help me out without carrying packs. That didn’t work.

The fog at that point thickened and the wind picked up. The temperature dropped and we wondered if were going to get soaked with cold rain. This was the low point on our collective morale. This really had melted down and it was not fun. I imagined the tidy speaker’s quarters at Barakel, my cozy book-lined inner study at Evangel, and my recliner at Granville Cottage. I imagined lying in my firm warm bed beside Lois under a nice quilt.

Through the whole ordeal little Kyle Kenneth shuffled along without complaining, wearing his dad’s hat (because it was “Man-Week”), and playing with his new knife.

It was just shortly before this that Chuk, who was striding along the shore on what looked like hardened sand, encountered a problem none of us had planned for. He stepped into a hole of quicksand up to his upper-thigh. There were places along the north shore where the sand was eroding and creating an illusion of a beach which was almost liquid sand. The sand was embedded with shell and gravel and when Chuk plunged into it he cut his foot. The cut filled with gravelly sand. He was not cheerful about that.

I was continually in prayer asking God for help and my heart was heavy with guilt that I had invited myself to the boy’s trip and then spoiled it for them. They were kind and respectful to me and none of them complained, but we were all very discouraged and began to talk openly of our love for fast food, hot showers, and flush toilets.

On the way over we chatted briefly with a Scoutmaster from Hart. I told him that I take my sons to North Manitou Island and my daughters to Mackinaw Island. Chuk said he wanted to go on the girl’s trip next time and didn’t ever want to see North Manitou Island again. We all agreed. I remembered the lilacs and Victorian rooms and cinnamon rolls and coffee shops lining the streets on Mackinaw Island and shook my head to clear my mind.

Our “Plan B” was to have someone carry my pack along with theirs and for two of them to help me “hop” around the north end of the island. We realized that it would take the rest of the day and likely all night, but we were out of options.

After a half-hour of hopping I discovered that I could hobble just a little if I didn’t put too much weight on my foot and I began the long, laborious, and most painful hike of my life.

For hours we slowly make our way around the rocky north end as the sun fell lower in the sky. The evening was beautiful. My pain abated. The sun came out and warmed our backs. Eventually we could hear the bird songs, the surf and the wind. We could feel the warm sun. We could smell the fragrances of the outdoors. We followed the tracks of deer trying to avoid the places where they had floundered in patches of quicksand.

We walked into the early nightfall and then made camp just as a storm blew in. The clouds blew away in the night and the wind dried our gear. The morning was as beautiful as any I have every experienced in my life. My pain had slackened and I rose and started slowly down the beach. The others would break camp and follow.

The bright sun was coming up the sky. The wind was blowing fresh at my back. The lake was showing off stunning white-caps. Around the next couple points the dock came into view. It was a welcome sight. I prayed, thanking God for His help. Only a few hours before I had no idea how I was going to meet the ferry on Wednesday.

Within a couple hours we were all gathered on the soft grass near the dock. Kyle brewed us all come pour-over coffee that Chuk provided from Starbucks and the smiles came back to our faces.

Warmed by the sun, with coffee in hand, looking out on the Manitou Passage in a little cluster of the people I love most in this world my heart fell into thankful relief. The guys swam under the dock. Later they took some photos. One in particular touched me. Kyle wanted a picture of he and Kyle Kenneth. I had made a memory with him on North Manitou Island and he had made a memory with his Kyle. My fine, strong sons had shown me great love and respect and honor. We looked up and saw the ferry tiny in the distance, its engine growling, coming around the south point. All was well.

When we arrived in Leland we gathered in a circle and prayed. I embraced each son and asked his forgiveness. They were all young and strong and kind and would have none of my apologies, but lied and said it was a great trip. I got in my Jeep to head toward Barakel. The guys would head south to Grand Rapids. Later they told me that as I was rounding Grand Traverse Bay, they had stopped for lunch. Kyle Kenneth was eating his macaroni and cheese and stopped mid-bite and said; “I miss grandpa.”

A lot went wrong, but I must have done something right.