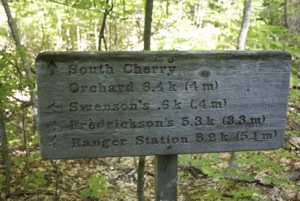 The morning of July 7th I woke eager for the week to begin. I taught the membership class in my study and then preached. When I finished I had lunch with the girls and then aimed my Jeep toward Grand Rapids. Chuk and Wes had left the night before. We would all meet in Grand Rapids, spend then night, and head north for a three day backpacking and hiking trip to North Maniou Island.

We ended the day together gathered at a big round table at Famous Dave’s BBQ. A platter full of barbecued brisket was the perfect way to begin a manly adventure. In the morning we had breakfast and headed north on US Route 131 towards Cadillac. 131 is a wide lightly-travelled highway that undulates through beautiful countryside. About 20 miles south of Traverse City the rain began and pounded the car is we drove north.

The sun came out as we drove into Leland. We ate and headed out into Lake Michgan toward the Island. It’s an hour-long ferry ride. When we arrived at the Island we readied ourselves, checked our map, agreed on our route, and strode into the woods.

We had all agreed that we would take the most direct route to the western shore where we remembered a vast stretch of sandy beach reaching well out into the clear, cold water. We wanted to spend as much time there as we could and hike directly out on Wednesday morning to catch the ferry-ride back.

I noticed that it was a little over five miles across the island. I didn’t remember it being a very difficult walk when we visited before. I walk about 3.5 to 4 miles a day so a five-mile hike didn’t intimidate me. Our packs were a little heavy because we didn’t intend to do any more hiking than necessary to reach the paradise of the west shore, swim, eat, drink coffee, tell stories, pray and watch the sun set. The guys let me go first even though Kyle was the man with the map who had done the planning. I didn’t want to fall behind the young guys.

About twenty minutes into the hike I went right when I should have gone left and added an extra loop of trail to our hike. It was a bad mistake. The trail tacked almost two miles of very difficult climbing on unmantained trail to our walk. It seemed to me they tilted the island since we hiked it last and the trail was all up hill. Trees had fallen across the trail. The heavy rain had washed away large parts of it. A very wet spring made portions very difficult and overgrown. It was just hard hiking.

After a couple hours we all stopped noticing the sound of the birds, the fragrance of the forest, and the occasional views of the lake. We just lowered our heads a trudged on wondering how long it would be until the western shore would come into view and we could drop our packs and plunge into the water. And it was a lot longer than any of us thought. We were weary and winded and the overgrown trail just kept climbing up.

All of this difficulty would have faded into a happy memory when we reached the refreshing lake if it were not for what happened next. After trudging seven miles of our five-mile hike we still had not reached the lake. Occasionally, perhaps two or three times a year, I have a flair up of gout or inflammation in my right foot that makes normal life difficult without any gout treatment, and walking impossible. It feels like something is broken or dislocated. When it happens it is extremely painful and I will be off my feet for a day or two until it has abated. It goes away almost as quickly as it comes and within a day or so I’m pain-free and back on my feet. It’s a painful mystery to me.

About seven and a half miles into the hike the pain began and by the time we reached the lake I could not take another step. It took me about an hour just to make my way up the beach to where we were forced to make camp and I knew we were in trouble. I had no idea how I could get off the island. I couldn’t take a step.

I was in pain that would not go away and began to pray for some way to get off the island. As far as I was concerned, at that moment, the whole trip and all my dreams for it melted down. I had imagined swimming, laughter, dinner, coffee, conversation, stories, qqScripture, prayers, a glorious sunset, and drifting off to sleep to the sound of the surf and wind. In my pain I managed one story and then literally crawled unto the tent to lie awake until sleep finally came at about 3:00 a.m.

We eventually did get off the island. How that happened will be an entertaining story for another day. Right now I’m sitting on our shady screen porch in Granville Cottage. The weather is ideal. It’s a cool morning. Breeze is making music in the trees. Our little fountain is singing harmony. I just enjoyed a jar of juiced vegetables. I had a good night’s sleep. I took Hazard on a brisk walk around the pond this morning. I’m just a short walk away from a wonderful flush-toilet. There’s cold water in the fridge.

In the comfort of our home I have time to think. What went wrong? We planned but we should have planned just a little more. We should have gone to school on the most direct route across that island and we should have very carefully followed the map to avoid adding the loop on the un-maintained trail. If we had made those simple adjustments we would have avoided the melt-down and we would be telling a much different story.

When you are suffering through an experience like that there is nothing funny about it but upon reflection, there is an amusing irony to the whole affair. When we last hiked North Maniou Island it was such a memorable experience that we saved a large map of the island and the map hung on the wall of the boys room for years. For years every night the boys would go to sleep under a map North Manitou Island. If we had studied the map and if we had carefully followed the trails, what a difference it would have made.

That’s something for people with dusty Bibles to think about. A Bible is like a map. It’s nothing more than a decoration if you don’t follow it.

Seeing the Sacred in the Mundane

At the End of the Parade