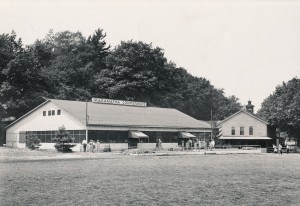 Our trip to the Manitous will live for years as an unforgettable family tale, perhaps more so because it did not go at all as planned. While preparing for the trip, knowing that Kyle Kenneth, our oldest “grandbuddie,” would be with us, I thought of telling the great legend of the Sleeping Bear (you can Google that if you are the curious sort). Instead I wanted to tell impactful, true stories that would stir the hearts of the guys to live for Christ and make Him known.

Down the west coast of Michigan on the shore of Lake Michigan south of Muskegon is a Michigan “Holy Place.” It’s been that way since the 1940’s. It was then that a pastor from Pontiac, Michigan had a vision for a place to get away from the heat of the city with young people to make Christ known to them.

He was Dr. Henry Savage (also influential in the founding of the Hiawatha Land Baptist Mission). He influenced his church to purchase the property and it became a well-known Bible Conference, now known as the Maranatha Bible and Missionary Conference.

The history and heritage of Maranatha is a fascinating Michigan story. One day a few years ago while visiting the Conference grounds, I discovered an interesting sub-plot to the Maranatha story. It would have been a great Michigan story to tell if we had not been rained out our second night.

As I tell it now try to imagine a perfect night with the stars over the silver and purple water of the Manitou Passage. We are in a circle of people we love most in the world sweetly weary from a long day of swimming in fresh water and hiking in fresh air. The surf laps gently and steadily on the shore and the wind stirs the leaves in the trees behind us. All else is silent as we slip into story.

One summer day when we lived in Fremont we took the morning off to drive to Maranatha and attend the Bible Conference during Moody Week. After the session ended a man walked up to us and told us that he had come to Maranatha in an unusual way many years earlier as a boy.

He said; “The first time I came here I was with my friends and we camped here overnight without permission. In the morning he was playing tennis when a man came up who was obviously official and said, “Do you boys have permission to camp here and play here? Do you realize this is private property?”

The boys were speechless before this apparently stern and official-looking man. He looked at them without smiling for a moment and then said;

“Deal,” they said. Then he beat them both having “lost” the bet they stayed and that week the found Christ as their Savior there on the sandy shores of Lake Michigan.

The “stern official” was none other than Dr. Henry Savage himself, the founder of the camp. The man who told me the story still lived there in a yellow house just next to the Conference grounds.

I love that story and whenever I think of it I want to live the part of Dr. Henry Savage, the pastor with vision, passion for Christ and compassion for boys without Christ. On our hike we took trail names like they do on the Appalachian Trail. My trail name is Barnabas—the name means “Son of Encouragement.” I want to be a “Great Heart” like pastor Savage so I can make Christ known to people all over Michigan. I hope you will join me with your life now and keep serving Christ faithfully after I am gone.