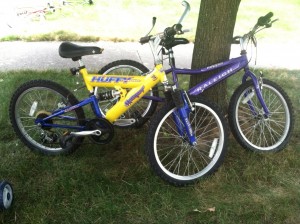 Saturday I spent a little time working on organizing the garage. It’s time consuming, not so much because of the work itself, but because I keep finding things that tug on my memory. There were letters and pictures. There were bikes outgrown by Wes and Hope. Over in the corner leaned a baseball bat discarded long ago. There was an old sweatshirt Chuk used to wear. A pair of rollerblades reminded me of the three older girls and their inseparable friends Courtney and Mariah Webster from Fremont. They spent hours skating around the neighborhood. On a summer evening they would draw other youngsters from all over the neighborhood and laugh out in front of the house under the street light until long after dark. Of the five girls two are married and by Thursday the number will be three.

I rolled the bikes out to the street and stood there looking at them with a lump in my throat. Hope drew up a “Free” sign on cardboard. These memories are too sacred to sell. Wes drove away to college this summer in an old F-150 pick-up. Every day Hope mentions him with a little tone of mourning in her voice. I stand and imagine a young dad running down the road after his girl, her hair is blowing in the wind. She is riding Hope’s old bike. He’s trying to keep her up-right. He won’t be able to keep up. She will get away from him. He will have to stand and watch her go. The memory of it will tug at him and he will stand and watch with a lump in his throat.

I go and make a hospital call. When I get home the bikes are gone. The memory will never fade.

If your heart ever gets hard or if it’s been a while since you had a good cry, go out and paw through the stuff in your garage for a few hours. You’ll see what I mean. 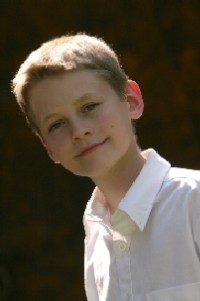