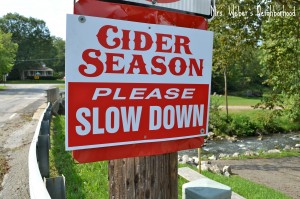 This morning, when I stepped off the porch, it was cool enough for a jacket. It’s the time of year in Michigan our thoughts drift toward college football, fields of corn turning gold, hayrides, orchards, cinnamon donuts, cider mills, blue autumn mornings, and crisp, sweet apples. Since boyhood I have enjoyed the simple pleasure of eating a new Jonathan apple out on the sunny porch in the cool of an autumn morning. For a while we lived in the little village of Logansville three miles from Degraff, Ohio.

The wonderful back road from Logansville to DeGraff was the setting for many of my favorite boyhood adventures. Swimming in the creek, riding my bike, running from mean dogs, and apple fights with Glenn Fairchild and Steve Strunk.

One day we climbed over a fence and into an apple tree. We ate a few apples and used the rest for “hand grenades.” Lobbing the apples at each other none us noticed the man approaching. He was the farmer who owned the tree and the surrounding property upon which we were trespassing.

The man looke at us sternly but rather than ordering us off his property or giving us a tongue-lashing, he said something that surprise us all; “Boys you are welcome to those apples, I just don’t want you to waste them. You are free to come by here any time, but eat what you take.” I remember thinking, “When I grow up, that is the kind of man I want to be.”

Vance Havner was a boy preacher. He left college after his first semester and never returned. Instead he travelled all over the nation preaching at every major Bible College and Conference in the land. He was a personal friend of Billy Graham. Havner wrote over 30 books. One summer afternoon up in Schroon Lake, New York, sitting in an Adirondack chair overlooking the water Havner’s delightful little book Pleasant Paths inspired me to write.

When he was young he fell into confusion because scholars kept telling him that large parts of the Bible were not for him… They said he was trespassing on the promises of God for others.

“In my early Christian experience I set out to read the Bible, taking the promises at face value, believing the Scriptures as I found them without benefit of footnotes or commentaries. I began with Genesis and was claiming everything for myself when I was informed that those promises were for the Jews! My ardor was dampened but I did not want to lay hold of anything that did not belong to me, so I moved into the New Testament and began to appropriate the blessings of the Sermon on the Mount when again I was interrupted and duly notified that all those things belonged to the Kingdom Age. Not wanting to trespass on the Kingdom Age, whatever that was, I started over in the Acts and was daring to claim some if not all the fruits of Pentecost when I was again reminded that the Acts covered a transitional period and that we were not to press those matters too literally! By then, I did not know which promises were mine nor could I stand with confidence on any passage of Scripture lest some divider of the Word might come along like a policeman to order me off private property. In desperation I said, “Lord, I’ve heard of a man without a country, and I’m becoming a Christian without a Bible. Give me a verse I can claim for my own.” He answered with one I have stood upon ever since: “. . .let God be true, but every man a liar .” (Romans 3:4)!”

God is eager to bless and his promises are abundant. The Bible is full of promises. They reveal the generous nature of God. The owner of the orchard of Biblical promises is not eager to order us off his property. He wants us to taste the sweetness of his promises—all we want, and not waste a single one. All of them have application to every child of God. Sink your teeth into them.

Blasphemy with a Twang