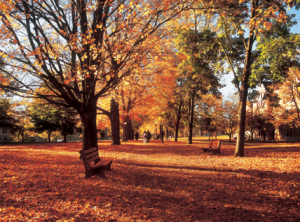 I was in Ann Arbor on Labor Day weekend. We had lunch at a favorite spot. The girls wanted to visit a shop. I dropped them off and circled the block looking for a place to park. At one corner I paused to allow a woman to cross the street. I noticed she was holding the hand of another woman—a young woman of college age.

A few minutes later I noticed them again. This time I watched their faces. It was a crisp fall afternoon. The sky was clear and the there was anticipation in the air, but they were not smiling. There was something like sadness in their eyes. They were not just holding hands. It was as if they were clinging to each other.

The older woman was the mother. She was a single mother. The younger woman was her only child. This would be her first time away from home. She has won a scholarship to the University. Her mother did not want to say goodbye to her but she could not deny her the opportunity. She has always been a very bright girl. She would not stand in her way. She would experience things her mother had never had the chance to enjoy.

They spent the weekend getting her dorm room ready. There was a little fridge to keep her coffee creamer. There was a burner for her meals. In the lone window were curtains made from the same fabric as her curtians at home.

“So you will remember,” mom said as she hung them. They both had puttered around the apartment all day on the edge of tears. They went to eat though neither of them had an appetite. They were spending their last few hours together. The mother had to leave. She had to work in the morning. She had a tearful drive ahead of her. She would have to leave her daughter alone at the University. She would go home to a silent, empty house for the first time in most of two decades. She was a young woman herself when this began. Not now. You could see all that in their faces while they crossed the busy street clinging to each others hands. At least that is what I imagined while I was circling the block on cool fall afternoon in Ann Arbor.