Yesterday we interviewed a couple for membership. They are older folk. He (Alex) immigrated to the United States from Hungary in 1957. I asked him to tell us how he came to know the Lord. He said that he was raised in a Christian home. He knew the gospel and he knew what was right but he did not yield to Christ until he was older.

During his testimony he said; “My father was a farmer. He farmed with horses. When I was a boy I noticed that he would stop before he began to plow his field and remove his hat. He would bow his head in silent prayer, then he would put his hat on and begin to plow.”

Later, when Alex was fleeing from the Russians and trying to escape Hungary to come to America, he lay in a barn in the night and cried out to God for his help. It was then he began to yield his heart to the Lord. God allowed him to escape to America and he settled in the Delray community in Detroit. He was baptized there in the Hungarian Baptist Church and he and his wife Maggie raised a Christian family.

As I listened to his beautiful testimony I was glad that this elderly man with deep and sincere affections for Christ would find a spiritual home at Evangel and I prayed that my children, when they are years and miles removed from the home of their youth, would remember me removing my hat and bowing in reverent prayer before my day’s work. 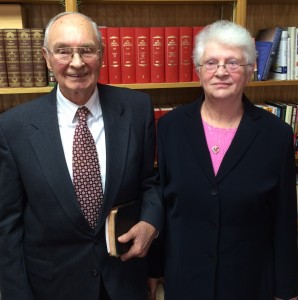