Here is a classic re-post from eleven years ago. 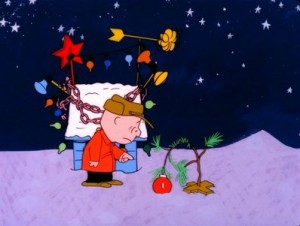 The decorations around the Inn this year are beautiful. A fire burns in the huge fireplace in the lobby. We are warm, happy and secure. But I remember a difficult Christmas when we had no tree or decorations. The children were complaining about it so I sent them into the woods to find one. About a half hour later I saw them coming from the woods dragging the most pitiful little branch of evergreen you ever saw. It made Charlie Brown’s tree look like the one at Rockerfeller Center. They had cut the top out of a pine tree. We put a strand of lights on it and propped it in a corner. We prayed. We laughed a little. We cried.

I like to write happy stories that encourage so I have never written of this Christmas until now. It is the most memorable Chritstmas of my life. Not because everything was perfect but for the exact opposite reason. Our lives were in turnoil. We were practically homeless and we were deeply discouraged. It was 1994, the year Wesley was born. The house we were renting was on the market for sale. We had promised to move if it sold and it did. We were to be out of the house by the fifteenth of December if I recall the date.

We thought we had a contract on another house, but at the last minute the deal fell through. We had no place to go and we were tempted to stay and tell our landlord that it was simply impossible to move. We knew that he would have to go through legal channels that would give us the needed time to get us thorough Christmas and the New Year’s Day and we had the promise of a nother lease by then.

I received counsel from people who love us much and care for us deeply to stay put until we had a place to go. One morning when I was weighng the decision I rose early seeking direction from the Lord. The Lord brought Psalm 15 to my memory very clearly early that morning.. “–he that sweareth to his own hurt and changeth not.” I knew that I needed to keep my promise.

I called our landlord and appealed to stay longer. He said I could only if I had no other place to go. That day some Amish friends called and said they knew of a small house out near Walhounding that was vacant. They made hay there in the summer. The house we small and it was not in good repair. It was never occupied. A friend made some repairs to the hot water heater so it would be safe to operate.

Wes was born on the tenth. Lois took Wesley and the girls to stay with her mother. They would be warm and safe there. I took charge of the move. A young lady from the church and her boyfriend came to help us. The day we moved our Amish friends helped us. The ladies made a meal. My brother Nathan was there working with us all day. Toward evening everyone had gone home except Nathan. We went back to get one final load. It was late at night. The rain had fallen all day. Almost everything we owned was in a garage at the little house in Walhounding. We would store it there until our permanent home opened up.

Nathan and I, wearily loaded the final load and took it to the new place. When we arrived and opended the garage door we discovered to my horror that all day the rain had been pouring through holes in to roof onto the top of my library and everything else we had stored in the garage. We quickly moved everything away from the leaks and covered our possessions with a tarp.

The house had no well. The drinking water was supplied by a sistern across the road and down the hill from the house. It seemed at this place if we had water we did not have heat and if we had heat we did not have water. The weekend we moved it rained continually. Later it turned very cold. In the middle of the night the heater went out. There was a gas well on the place so heating fuel was free but worked sparatically. The owner said there was a local man who knew how to keep it going. If we needed help we were to call him. Of course heaters rarely go out in the daytime. In the middle of the night we got this poor stranger out of bed to come and get the furnace going. We didn’t know what to think of him. We felt vulnerable, insecure and discouraged.

During our time there the entire family was sick. We would be sick through Christmas and on into the first part of the new year. Lois came back with little Wes and the girls for Christmas Day. It was on a Sunday. That morning we got up to go to church and the tire on the car was flat. After church we left for Kentucky. When we returned we went to Michigan to visit relatives. We would never have stayed so long if it had not been for the difficult circumstances back home.

During that time I preached for a special New Years’ Eve Service at my brother-in-law’s church in Coldwater. That service would be a major intersection in the road of our lives. There that night was a family that God used to direct us eventually to Fremont where we would serve for six good years. That same family was used of the Lord again just a few months ago to confirm the direction of the Lord for us to move here to the Character Inn.

That is the way God usually works. He usually takes us through the valley of the shadow of death before we arrive at the table he has prepared for us. Some dark and difficult days are usually a part of God’s good plan. That was true for the Lord Jesus Himself. That will always be true for each of us. So far I can say, in spite of difficult circumstances and dark days that goodness and mercy have followed me all the days of my life.

Children Who Are Givers