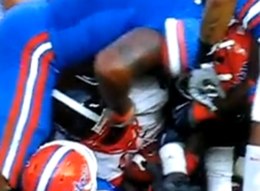 The Bible says that there is no such thing as a secret act. A few years ago during a heated rivalry game between Georgia and the University of Florida one of the players got his helmet ripped off and his eye scratched. He waited for an opportunity to retaliate and later in the game, during a pile-up, after the play was whistled dead, he reached into his opponent’s helmet and tried to gouge his eyes. He thought no one saw, but he was wrong. The incident was captured on film and now the video of his low-life behavior is all over the internet in slow motion. He was suspended and his team has issued an apology. What he thought was a secret act is public.

How many times have you heard that story in some form? Let’s live secretly with a great awareness that all we do is open before God and there are no real secrets.

Let’s be aware that no matter how carefully you live, you will not want to stand before God unless you stand in the righteousness of the only One whose secret acts could be revealed without shame and without sin. Christ is our righteousness. Christ died for our shameful sins. We must be hidden in Him.

Proverbs 5:21 For the ways of man are before the eyes of the LORD, And He ponders all his paths.

Ecclesiastes 12:14 For God will bring every work into judgment, Including every secret thing, Whether good or evil.

Mark 4:22 For there is nothing hidden which will not be revealed, nor has anything been kept secret but that it should come to light.

Romans 2:16 in the day when God will judge the secrets of men by Jesus Christ, according to my gospel.

1 Corinthians 4:5 Therefore judge nothing before the time, until the Lord comes, who will both bring to light the hidden things of darkness and reveal the counsels of the hearts. Then each one’s praise will come from God.

2 Corinthians 5:10 For we must all appear before the judgment seat of Christ, that each one may receive the things done in the body, according to what he has done, whether good or bad.

Revelation 20:11-12 Then I saw a great white throne and Him who sat on it, from whose face the earth and the heaven fled away. And there was found no place for them. [12] And I saw the dead, small and great, standing before God, and books were opened. And another book was opened, which is the Book of Life. And the dead were judged according to their works, by the things which were written in the books.

Brandon Spikes, the eye-gouger, is not alone. Who of us would want our shameful acts and attitudes displayed in slow-motion for the world to see over and over again? God help us live by God’s help in such a way that we will not be ashamed when secret things are revealed.

Everything Important Depends on This