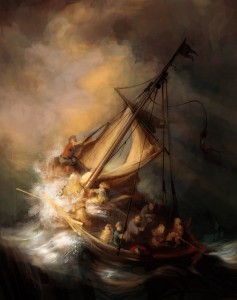 In the home of my youth we had a warm tradition. Back in the 1940’s a traveling evangelist names Sykes wrote a children’s chorus. It was based on a simple couplet lifted from a hymn by John Newton. Newton was a sailor before is was converted. It’s sort of a sailing song. I don’t know where my parents first learned it but they taught it to us and it is an enduring memory.

We only sang the song when the mood was right. I don’t ever remember singing the song at church. It was a song we sang as a family when things were hard and dark storms blew into our lives. When we had received bad news or some difficulty was hanging over our heads someone would start the song. When we were feeling the weight of a set-back or difficulty we would sing the song. Sometimes when we were just wrestling with a bad mood over some irritation or hardship we would sing the song. No one would ever announce the song. After we had joined hands to pray around the table Mom or Dad would just begin to sing and everyone else would join in.

By the time we reached the little chorus usually the family would break into two or three parts and and end in smiling harmony.

Next time life takes a hard turn—join hands and sing that little chorus a few times. Jesus is the King and the Creator of the waves and winds of the sky and sea. If He is in your vessel, you are safe no matter how dark the night—no matter how threatening the storm. He can calm the storm or deliver you safe.

Is Christ in your vessel?