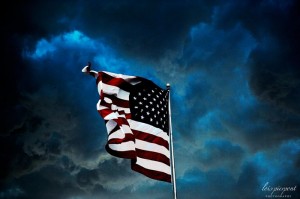 Saturday morning I preached the funeral of a long-time member of our church. I usually ride to the cemetery in the coach so I can spend time talking to the funeral director. This time I drove because the cemetery was just south of the church and I would be returning there for the family dinner after the graveside service.

I’m always saddened when driving in a funeral procession in our area. The civil gesture of pulling over to the curb to allow the procession to pass is a thing of the past here and I miss it. It saddens my heart. Along with other civilities–it a part of an America that is no more. There may still be some rural places where it happens but not in our part of modern suburbia. We live in a hurry here.

We were in three lanes of traffic driving toward the cemetery with funeral flags up and lights on and cars in the opposing lane did not stop or slow. On both sides of our procession, cars shot around us and even sometimes cut in as if we were a nuisance and a bother.

The man who died was named Allen. Our nation for years has rested on the shoulders of men like Allen. He was a part of post-WWII America and worked and planned and built and payed taxes. He was faithful and loyal to his wife. He was kind and selfless with his children. But the people in the cars were on errands so important that they could not slow down long enough to show a simple gesture of courtesy to his family and friends.

A few years ago we were driving in a funeral procession and I was inwardly grieved by the rudeness of the drivers, sad that the era was of common civility was passing in my lifetime.

The woman we were burying was named Lisa. She was loved by many She was a generous, sincere, hard-working Christian lady who kept her family together with the glue of love. She had died suddenly and unexpectedly and she was only in her early fifties. It was a sad procession to the grave that day.

The procession was approaching a busy corner when I noticed something unusual. People were coming and going–many of them not looking up to see us pass. But standing in front of a walk-up ice cream store on the corner was an older man. He looked over and saw the hearse and the procession coming. He turned toward us, removed his hat and held it there over his heart until all of us had passed.

There on that busy corner in the city of Detroit, was one man who would not let civilization die. —And hope sprang up in my heart—hope that as long as I am determined to be civil and kind and thoughtful–civilization does not have to die. Not in my heart. Not in my family. Not in my church. Not in my town.

It’s Christian to take time to pause to acknowledge the humanity and dignity of the fellow occupants of our planet.