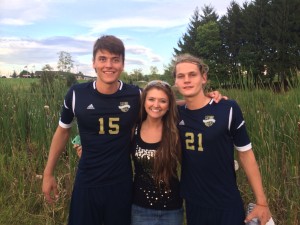 Daniel has one more year of college sports eligibility. He will use it to play soccer this fall. He has been named the captain of his team. He will graduate in December. He attends Grace Bible College in Grand Rapids. Wes is playing his first year. They are both in ministry training programs. Daniel’s major is pastoral studies and Wesley’s is youth ministry.

Last night we drove up to the game. It was a beautiful night. In a week and a day Holly will marry and move to Oregon so she wanted to see the boys play. (Incidentally, they won handily). This picture warms my father-heart. By the kind grace of God all the children love the Lord and deeply love one-another. When they are around each other you can actually feel the love.

Lois and I are so thankful that we were able to learn together at home. God gave us countless hours together as a family, singing, eating, travelling, weeping, laughing, worshiping, arguing, wrestling, playing, talking–even, on occasion, dancing. They have a palpable love and loyalty for each-other.