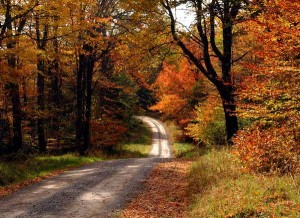 There’s something about autumn that stimulates my heart, stirs up my soul, and even triggers worship in me. I know there are others who understand this. Jan Karon is one of them. In her novel At Home in Mitford she describes the coming of autumn in a beautiful way;

“Autumn Drew on in Mitford, and one after another, the golden days were illumined with changing light.

New wildflowers appeared in the hedges in fields. Whole acres were massed with goldenrod in fleabane. Wild phlox, long escaped from neat gardens, perfumed every roadside. And here and there, milkweed put forth it’s fat pods, laden with a filament as fine as silk.

There were those who were ecstatic with the crisp new days of autumn and the occasional scent of woodsmoke on the air. And there with those who were loathe to let summer go, since it had been “the sweetest summer out of heaven,” or “the best in many years. ”

But no one could hold onto the summer once the stately row of Lilac Road Maples begin to turn scarlet and gold. The road began it’s march across the front of the old Porter place, skipped over MainStreet and the war monument to the town hall, paraded in front of First Baptist, wound up along the rear of Whiney Ivy’s small cottage, and ended in a vibrant waves of color that little Mitford Creek.

When the show began, even the summer diehards, who would by then few enough in number to be counted on the fingers of one hand, gave up and welcomed the great spectacle of a mountain autumn.”

Today the temperature will climb toward 90, but in just a short time we will welcome the spectacle of a Michigan autumn once again. Prepare to worship.

Prayer at the End of a Difficult Day