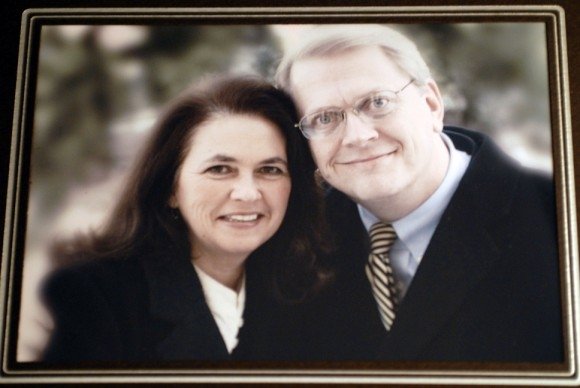 Thirty-six years ago today Jeff Tokar and I went golfing. It was a Friday night. I was in my second year of college. Across the street from the college was a little carry-out pizza place. We stopped there to pick up a couple slices. Dollar-a-slice. Good stuff. In God’s kind providence Lois and I were hungry at the very same time that night.

She was sitting there waiting for her order. Long brown hair. Deep brown eyes. It was hard not to stare. I stayed cool. She wore a light blue top. I smiled at her. Saturday in the school cafeteria I noticed her again. She came in with the new crop of freshmen and I knew she would get a lot of attention. I would have to move quickly. Her friends had gathered around her and they were singing happy birthday to her. I wondered if I could ever arrange to meet her.

That night Dave Messer and I attended a church picnic sponsored by United Baptist Church. As we approached the picnic, I saw her again. I asked for directions but could not draw her into a longer conversation. I kept my eye on her. Toward dusk we were all playing volleyball. As evening came on and it grew dark they built a fire. When the volleyball games ended I noticed that she was still out in the grass looking for something. I offered to help. She had lost her headband.

I noticed her beautiful long hair and dark features. Years before, as a little boy, I had decided that I would marry a woman with long dark hair. I ran to my car to get a flashlight and found her headband. We sat together at the fire while one of the students gave a devotional talk. I got her some watermelon and tried with every ounce of charm and personal charisma I possessed to monopolize her time and attention.

Knowing that I would be leaving with a singing group soon on a tour of the mountain west, I knew I would have to move quickly or others would move in while I was off campus and I would lose my opportunity. I asked if she would have dinner with me. She said no.

“My mother would not want me to go out with someone I don’t know.”

I countered; “Well, that’s why you date–to get to know someone.”

I recall this conversation almost word-for-word even though it happened thirty-six years ago.

“Well, Lois, you have to eat. Let’s eat together on campus and then when you feel like you know be well enough we can go out. Whata’ ya’ say?”

“Well I won’t make you decide. I will just be there for supper on Monday night at 5:30 and if you want we can eat together.”

Monday I was waiting for her. She had to eat. There was only one door. I stood waiting. About 5:35 she came around the corner and into view. She was not alone. She was with two or three girls from her dorm. She was beautiful. She was wearing a dark tan dress with three-quarter-length sleeves and a colorful panel in front. Her long hair was down and her dark eyes were cast down and did not meet mine until, for just a moment, she looked up as she climbed the steps where I stood.

“Can we eat together,” I asked as she approached. “OK,” she answered and I fell into step with her.

A year to the day from the night I first saw her in the pizza joint she walked the little aisle in her church in the West Willow subdivision in Ypsilanti and took my name.

Looking back over the years I know that God was arranging just what I needed in answer to my parents prayers out of the kind mercy of his giving heart. I may have had some intuitive sense of the depth of her character, but I’m sure that God protected me and guided us together.

Thirty-five years ago today we drove away together toward our little up-stairs farm-house apartment in Ohio. The Carpenters song, “We’ve Only Just Begun” played on the radio. Lois changed from her bridal gown into a pretty mint-green dress in the car as we drove. The intimacy of it thrilled me. We were married and soon we would lie together in our bed as the sweet scented air billowed the curtains of our room. We would go to church together and take long naps and Sunday afternoons. We would work at building a life together and beginning a ministry.

At first it was almost as if we were playing. But all to soon it became very real and we both knew that we would need God to help us. Maybe we needed him more than most. And he was there for us.

Today, four sons, four daughters, four-grandbuddies, a grand-princess, and 35 years of pastoral ministry together I know that God put us together and God has kept us together. And together we will be until one of us releases the other into the presence of Jesus.

Thinking about the kindness and mercy of God over our family makes me determined by the grace of God to love Him and serve Him together with Lois as long and we have life and breath.

I once heard Jay Kessler pray; “Lord, thank you for marriage. That was one of your best ideas ever.”

I Got a Bug in My Eye