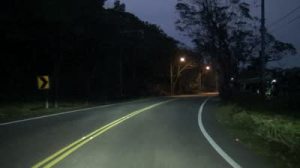 During my Junior and Senior years of High School dad would allow me to drive to northwest Ohio from our home in Greenville in western Ohio to visit a girl I met at camp. It was a trip of about two and a half hours—my first long drive alone.

Dad had a policy that I did not have a curfew–because he did not want me to endanger myself racing home. He stated his policy like this: “Promise that you will leave by a certain time and you are on your honor for that, then take whatever time you need to get safely home.”

I especially remember those long, solitary late-night drives. In those years if cars were equipped with a radio it was often only an AM radio. Within a few years an AM and FM radio were considered standard on most cars, but my simple ’72 model VW was equipped with a a simple AM radio. In the night the signals would bounce across the country from major cities across the Eastern U.S. and I would search the dial for radio theater. Usually, late at night, I would find an episode of CBS Radio Mystery Theatre. Through the darkness I would ride in the shelter of my little car-a young boy becoming a man, exploring the world and love a little at a time, driving though the night and listening to the radio. Outside passing little bergs and towns, Napoleon, Defiance, Paulding, Van Wert, Celina (at the time I had no way of knowing that would meet and marry another girl and in less five years we would live just west of Celina, I would pastor a little country church there, we would have our first child. Driving thought the night past houses lit from within I had no idea). Finally I would reach Greenville and our home on 227 Victoria Drive.

I experimented briefly with a CB radio and an 8-track tape deck. They were soon laughably obsolete. At the time I could never have conceived of the personal computer or the Internet or podcasts or whole collection of digital music on a single device smaller then a cassette tape.

I had a sense of well-being on those late-night drives that has followed me down through the years wherever God has called us to serve Him. You don’t have to be rich to be happy. It isn’t difficult to find peace and joy in life if you know in your soul you are right with God and if you learn to enjoy simple things like a solitary drive and the company of good radio.

Her Name was Beth