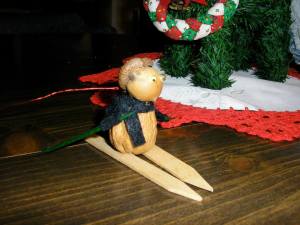 No one loves Christmastime more than I do. But when you are the head of the household it has its attendant frustrations. One of them is finding the money to cover regular expenses and the additional expectations of Christmas gifts and celebrations and trips.

One December afternoon about ten years ago (actually it would have been about December 1992) a fresh snow had fallen so the girls made cookies and we put on Christmas music and we were all filled with Christmas enthusiasm. The little ones chattered excitedly about the things they wanted to buy each other for Christmas. I listened with a mixture of joy and frustration. Joy because it pleases me that they want to give to each other, frustration because all the income for all the purchases would have to come from me and we operate with thin margins.

I tried to keep a robust Christmas spirit intact and sent a quick prayer heavenward asking for a creative way to explain why the children should not make Christmas joy dependant on spending large amounts of money, especially my money.

As often happens, the light of creativity shone through the small crack where difficult circumstances met sincere prayer. Lois was working in the corner of the family room on some home-made Christmas ornaments. They were little skiers made of nuts and creativity. “Lois, how long does it take you to make those?” I asked.

“Do you think you could have about thirty of them done by tomorrow evening?”

“When I was a boy I once gathered a box of nuts from beneath the three big hickory trees that grew up the hill from the pond on Grandpa’s farm. I put them in little bags and sold them door to door between Thanksgiving and Christmas. These ornaments would sell much better than that and the children could pay you for your time and material. They would still make enough to buy each other gifts for Christmas.”

She went to work and the next evening about dusk we headed through the snow-covered hills into Mt. Vernon. On the way we enjoyed the Christmas lights, listened to carols on the radio, and sang along. We picked out a nice part of town where people had decorated beautifully for Christmas. I taught the children a little sales presentation, gave them my best sales-manager motivational speech and sent them on their way. I prayed for them as they shuffled up and down the sidewalks with baskets of home-made ornaments in their mittened hands. In about an hour and a half the baskets were empty and the children’s pockets were full of money.

We turned up the heat and drove back home to celebrate with the manufacturing department and put in an order for more ornaments. The ornaments sold for about three dollars each. One especially nice ornament was called Ruthy Raindeer. We sold her for five and she was very popular. The next night we sold sixty ornaments. For the next two or three weeks we sold ornaments for a couple hours every night we were free and by Christmas the children’s sales totaled over two-thousand dollars.

God puts a longing to give in every human heart. The Heavenly Father loves to give good gifts to His children and he also loves to see his children give good gifts to each other. That is just what the Bible says. Paul the Apostle wrote it in the second Corinthian letter; “God loves a cheerful giver. And God is able to make all grace abound toward you, that you, always having all sufficiency in all things, may have an abundance for every good work.”

In other words, God is a giver and he loves to give us what we need so we can be givers, too.

The year of the big ornament sale the children were not even tempted to spend any of the money from the sales on themselves. All the money they made was used to buy each other gifts. That year will always stand out in our memory as a family. Each one of us had just what we needed to show our love for one another. On Christmas morning the children were able to exchange nice gifts with each other and they earned all the money themselves. It warmed my heart to watch it. They joked about it later saying that they peddled ornaments door to door for needy children. And the needy children were their own brothers and sisters.

Giving is a godly thing. That is what Christmas is all about. God started it himself when he gave us his only Son, Jesus.