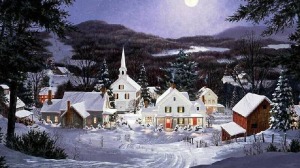 We are only ten short days from Christmas. This weekend I preached at a Christmas Conference. I taught Scriptures and told stories to inspire people to make Christ widely known like the Shepherds did after they had witnessed the birth of Jesus. One of the stories I told I want to share with you today.

Charles Spurgeon once preached a Christmas message from the story of the demon-possessed man from Gadara. The heart of the message came from the instruction Jesus gave the man after he was delivered. Instead of Jesus saying “come and follow me” he said; “Go home and tell everyone you know what God has done for you.” Surgeon told his great congregation that day to go home for Christmas and make Christ know—His compassion and his power to deliver from the darkest bondage.

When Gary was just twelve they found his dad floating in the Detroit River. They say it was a suicide. Gary said his father never taught he or any of his siblings anything good. For a short period of time when he was a boy his mother allowed him to a ride a bus to church. They gave him a Bible which he kept even when he drifted away from church and into trouble.

Gary became a very troubled young man. He was suicidal. During this time in his life he would drive regularly down Telegraph Road past our church to buy drugs. One day he was planning to smoke Marijuana with his dealer but they couldn’t find any papers to roll a joint. The drug dealer picked up a Bible and said; “We can just tear a page out of this.”

Gary remembered his Bible and the experience frightened him and God began tug on Gary’s heart. That was a little over ten years ago and today Gary is a godly husband, a Christian dad and a faithful usher at Evangel.

One week I preached on the story of the Maniac of Gadara. Gary wrote me that week and said that before he became of follower of Christ he was oppressed daily by demons. He said; “I believe Jesus had compassion on me and he has forgiven me and delivered me.”

When I was a boy I had a favorite radio program. It originated from the Pacific Garden Mission in Chicago. Each week the program featured a new dramatization of someone’s conversion. The program was called Unshakled. I was always thrilled to hear of how Jesus can set people free of the worst kinds of sinful bondage. Gary’s story should be told on Unshakled.

A few years ago I received an e-mail from Gary. Here is what it said:

“Hi Pastor; You are the first person I’ve ever E-mailed. Your Love for the Lord is very encouraging. Thank you. I saw a light shinning in a dark place one night on my way to work I work midnights at a automotive warehouse. That light was you witnessing at a corner party store. I had to stop for gas on the way, seeing you witnessing reminded me of the Gospel tracts in the console of my car. I gave one to the man at the next pump. …please pray for me and my family to keep growing in the Lord.”

That night I was tired and eager to get home. I stopped for gas and took just a few minutes to befriend a Muslim man named Sam at the gas station. I didn’t know it but Gary was watching that night and my obedience to God inspired him to make Christ known.

Wherever you go make Christ known. Take time to care about people. Listen to them and have compassion. You never know what God will do with your witness. You never know who might be inspired by it or what will happen when they do what they do because you did what you did.