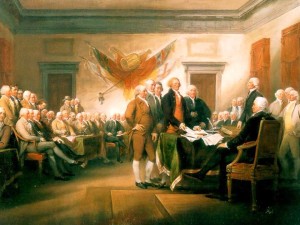 The dark cloud of God’s judgment hangs over our nation today.

In our time the official courts and institutions of government and civil life in our land are governing without serious regard for the law of God. The law of God no longer appears to be a factor in the rulings of our courts. The law of God no longer appears to be an appropriate subject for teaching in our schools. The law of God is no longer considered relevant in the musings of our legislative bodies. God’s law is set aside by most as a cumbersome anachronism. Collectively the popular culture and cultural influencers seem a little embarrassed by the law of God. When someone tries to bring the law of God into play in conversation “thinking people” cough, look away, and practice social inattention until someone mercifully changes the subject back to sports or weather or fashion or celebrity gossip.

In our culture we are forming collective opinions and convictions that are directly counter to the clear and unmistakable statements of Scripture regarding human sexuality, human flourishing, and matters of life and death.

As a whole Americans consider people of the conviction that God’s law is still binding on men and nations, a little out of touch, willfully ignoring the fact that can be easily demonstrated from history that the men who founded this great country were, for the most part, men of resolute belief in the Bible, the God of the Bible, and the law of God as expressed in the Old and New Testaments of the Bible.

Now we are scrambling to accommodate every kind of belief or suspicion or disbelief or point of view no matter how bizarre or perverse. Regardless of the fact that the Word of God locates the basis of false religions in demonic activity, we try to re-write our history with and open-minded pluralism that the founders never intended and the Lord directly condemns.

We officially and covenantally endorse sexual perversion, and protect a whole industry that profits from ending the lives of pre-born babies unable to speak for themselves. Now we wonder why a dark cloud of terrorism, false religion, economic disaster, societal decline, senseless violence, crime, family disintegration, and educational collapse hangs over our heads.

But our founders knew and clearly stated that a nation cannot flourish without God’s aid and His favor and no nation can disregard God and set aside his law and expect His blessing and protection.

On June 28, 1787, at the Constitutional Convention Benjamin Franklin made this statement:

I have lived, Sir, a long time, and the longer I live, the more convincing proofs I see of this truth — that God governs in the affairs of men. And if a sparrow cannot fall to the ground without His notice, is it probable that an empire can rise without His aid?

We have been assured, Sir, in the Sacred Writings, that ‘except the Lord build the House, they labor in vain that build it.’ I firmly believe this; and I also believe that without His concurring aid we shall succeed in this political building no better than the builders of Babel: We shall be divided by our partial local interests; our projects will be confounded, and we ourselves shall become a reproach and bye word down to future ages …

I therefore beg leave to move — that henceforth prayers imploring the assistance of Heaven, and its blessing on our deliberations, be held in this Assembly every morning before we proceed to business, and that one or more of the clergy of this city be requested to officiate in that service.

God’s people must unite in prayer, resolve to live holy lives, build godly homes and churches, be a prophetic voice, and proclaim the gospel so others can join them in an Ark of Safety before they are drowned in the rising waters of God’s judgment.