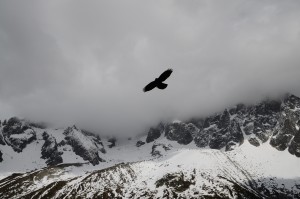 I recognized it as a quotation and went searching to find this fascinating and poignant story behind the poem:

John Gillespie Magee, Jr. was a pilot with the Royal Canadian Air Force in the Second World War. He came to Britain and flew in a Spitfire squadron.

One day while he was flying at a very high altitude, he was suddenly inspired to write a poem … which he did, right there in the cockpit of his airplane, in flight. After he landed, he turned the paper over and wrote a letter to his parents that said, “I am enclosing a verse I wrote the other day. It started at 30,000 feet, and was finished soon after I landed.”

This is the poem:

Oh! I have slipped the surly bonds of Earth
And danced the skies on laughter-silvered wings;
Sunward I’ve climbed and joined the tumbling mirth of sun-split clouds, – and done a hundred things
You have not dreamed of wheeled and soared and swung
High in the sunlit silence. Hov’ring there,
I’ve chased the shouting wind along, and flung
My eager craft through footless falls of air…
Up, up the long, delirious, burning blue
I’ve topped the wind-swept heights with easy grace
Where never lark, nor e’er eagle flew –
And, while with silent lifting mind I’ve trod
The high, untrespassed sanctity of space,
Put out my hand and touched the face of God.