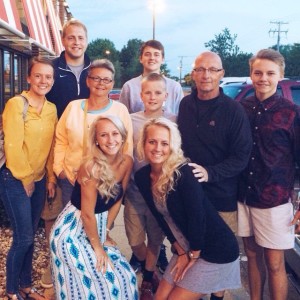 Sunday morning, February 1st in South Bend Bob Dubar woke up to a heavy snowfall. He usually got a cup of coffee and got to church early to serve as an usher. Sunday Bob spent some time clearing the drive of snow for his family to get to church. He shoveled behind the cars. He shoveled a path to the door of his wife Linda’s truck. He shoveled around the front of the truck to clear the snow away from the passenger side door. It was there he spent his last heartbeat serving his family and helping them serve God.

Bob was a servant. Rick Wood, who was Bob’s pastor for years, told me that Bob was always saying, “What do you need, Pastor?” During a soccer game in 2002 Bob noticed the team needed water. He went across the field and hauled a large orange cooler of water to the sideline for the team. He told Pastor Rick, “Something doesn’t seem right.” The doctors discovered that he would need a heart procedure.

The day after Bob’s memorial service his wife Linda found a note neatly folded in one of his wallets. It was his personal testimony. The last paragraph of the note read: “…September 11, 2002… a cardiologist put three stents in two different arteries around my heart. This was the first time I ever faced the idea that I might not live to be an old man and see my children grow up. Even though I did not want to leave Linda and the children, I knew that if I died… I would go to heaven and see Jesus!

The night of Bob’s visitation the lines began to form around 3:30 and mourners lined up around the halls of the building and waited for two hours to comfort his family and pay him respect. The lines did not empty until after ten o-cock that night. All during that time his beautiful children and grieving wife stood and wept and talked with each one who came to mourn Bob’s death and comfort them in their loss.

Our oldest son, Kyle deeply loved his uncle Bobby. Bob had invested greatly in him of time and wisdom and much money. When His beloved uncle Bobby died he wrote:

‘My heart is flooded with memories of my Uncle Bob today. Memories of when he gave me a job in his construction business when I was 15 years old. He let me drive with him when I was getting my permit, and when I ran a red light he was calm. He bought me my first caramel latte and then hundreds and hundreds after that. I was on his cell phone plan for many years. He took me to Florida to be part of his family vacation. He stood with me in my wedding and celebrated with me and Elizabeth on our happy day. He paid for the hotel room we stayed in before going on our honeymoon. It was through a connection from him that I got a job selling insurance. It was also through him that I connected with Grace Church where I would get my start in full time vocational ministry. I didn’t make much money in those days and weekly he would make sure we had what we needed, many times giving us money without saying a word. When we had Kyle, our first son, he came to the hospital and held him and cried. Our families went to eat hundreds of times together and he would never let us pay. He loved my wife and kids and watched out for them. We met for coffee almost weekly for the seven years we lived in South Bend. He never had an agenda other than to be together and listen. When I was with him and he met someone he knew he would always introduce them to me, like I was important to him. I went to him for wisdom with every big decision. We always talked about going into the coffee business together. I watched him as a father and husband. He loved his family with self-sacrificial love. Today, he suddenly went to heaven. Everyone who knew him saw Jesus in him. I will miss him while here on earth. We can have peace because he loved Jesus more than anything. He was my uncle, but he was also one of my best friends.”

At the visitation Kyle said; “Did you know about his group?” I didn’t because Bob was a doer—not so much a talker. He did so very many things quietly and faithfully.

“Yes, Dad,” Kyle said, “For years and years he has had a men’s group that met at Panera every Friday morning. Over the years it’s amazing how many men have been through that group. They always sat at the same table…”

Bob’s memorial was on a Friday morning. Quietly, behind the scenes, Kyle and Bob’s oldest daughter Carlie coordinated the beautiful service. Holly and Chuk and Hannah and Hope and I sang songs he loved of heaven and family. His pastor friend Dan Thomas spoke. A number of his friends spoke. His oldest son, David, gave a beautiful tribute to his dad over audible weeping all across the auditorium. Every seat in the building and balcony and video overflow was full. The service was live-streamed to friends who gathered in Florida. Kyle created a beautiful video tribute including photos of Bob and the song he played most often on his tablet—the Old Rugged Cross. The last words at Bob’s memorial were Bob’s. Kyle gathered them from a video of Carlie’s wedding. They were, “You always have time for things you put first which reminds me of the scripture verse in Luke 12:34 that says, “For where your treasure is, there will your heart be also. So my advice to you is to treasure your relationship with Jesus, treasure your relationship with one another, and if God choses to give you children, treasure your relationship with your children and your family and I think if you do those things, you will honor God with your lives and He will pour out his blessings on you like he has on me and mom.”

Kyle said to me as we prepared for the service on Friday morning, “Dad, did you hear the men are meeting this morning? Kyle told me Dan Blacketor was a long time member of the group. I connected with Dan and asked him to tell me about the group. Here is what he wrote:

“As everyone shared over and over at Bobs memorial service he was a man of great wisdom, insight and compassion.

Bob wanted to start a men’s group that had men from different church backgrounds and seasons in life. Can’t remember exactly when the group started but it was more than 10 years ago. We started at Honkers Restaurant and moved to Panera Bread when it opened up. We have been meeting on Friday morning.

In addition to men from different church backgrounds the group attracted men that were in work transitions. Most times we would read books for faith for men and sometimes study guides of books of the Bible.

Ages in the group has ranged from 23 to 87. Several of the guys did not have a strong faith background but were searching for answers. A large number of the men would only come for a season because their new job would relocate them or change their schedule.

Early on Bob would always pull out his little note pad and write down men’s concerns or prayer requests. Later he switched to his iPad. Even the last few years Bob’s new job required him to miss Friday mornings he would pop in every so often and every time we would have lunch he would ask about the group and the guys attending.

Many years ago one of the guys named the group “Friends of Bob” because of his impact on the number of guys that started to come because Bob invited them. He will be missed but always remembered.”

Bob was buried on Friday. The “Friends of Bob” group met on the morning of his memorial service. Bob’s friend Dan said; “We spent the morning sharing the greatest stories of Bob.”

I wrote these words for Bob’s Obituary:

Bob was a deeply sincere and active follower of Jesus Christ, a loving and loyal husband, an engaged and devoted father, and a genuine friend to so many. He was a skilled listener. He studied the hearts of his children and cared sincerely about others. He was a man of deeply-held convictions, but he was patient and gentle with all people.

He loved to be with his children, attending all their games and thousands of practices. He held a position of high responsibility as the Chief Operating Officer of Newmark Grubb Cressy & Everett of South Bend, but faithfully prioritized his time to invest in civic leadership, serve at Grace Church, and devote himself to his wife, children and friends.

He lived generously, continually giving and serving others. Bob loved to be quietly outdoors, sitting in the sun, fly-fishing with his boys, or walking the beaches of Lake Michigan. He read widely and was skilled at intelligent, warm conversation. He loved children and they loved to be around him. He loved a good story and had a joyful laugh and a ready sense of humor. He was most at ease in a small circle of friends, with coffee-in-hand.

To the very last beat of his heart he was joyfully serving others and he will be sorely missed.