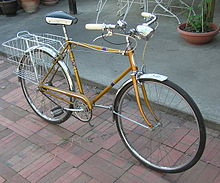 I was about thirteen when I started saving money from my paper route for a new bike. I rose at five in the morning six days a week from about 11 to 17 years old to deliver the Dayton Journal Herald. I’ve been an early-riser since. Dad saw that I was a high-energy kid and knew the discipline would be good for me and contribute to keeping me out of trouble.

I made about fifteen dollars a week. Dad had me open a passbook savings account and save most of what I made. After my tithe and a little spending money the rest was to go in the bank to save for college.

My bikes were always nice, reliable, used bikes pieced together from here and there—but now that I was making regular money I started thinking about a new bike—a brand new bike with speeds and skinny tires and hand brakes. I watched other kids ride past the house on bikes like that. Now that I was making my own money I could see myself on such a bike.

One Saturday morning running errands with Dad I found a bike at Western Auto. It was a 26 inch 3-speed. It was metallic yellow with bright, polished, chrome fenders. It was not a ten-speed English racing bike but we were common folk who did not squander money on such luxuries. Three speeds were more than enough to get me around town and it was a major up-grade from the red balloon-tired 24 inch Schwinn with side-baskets that I used to deliver papers and the little spray-painted, brown, fender-less Stingray that I bought for sixteen dollars.

I laid the bike away and arranged to pay around three dollars a week for it. If I remember it was sixty-nine dollars new. I think I put twenty dollars down to lay it away. Toward the spring of the year I sat down and did the math. I would have the bike paid off toward the end of August—after the summer had gone.

Then something wonderful happened. One Saturday morning just after the last day of school Dad said; “Son, I want you to walk to the bank this morning and withdraw some money from your savings account. I want you to pay off your bike and ride it home so you can enjoy it this summer.”

My heart began to pound. I ran to the bank, waited for it to open, and rode home with the wind in my hair fast as lightning. It was an embarrassment of riches. It was a think of beauty. It smelled new. I shifted. I braked. It was smooth and sleek and fast. That morning will live in my heart forever. You don’t forget something like that.

Today I’m a pastor and my bikes spend most of the year hanging up-side down from the ceiling of the garage. I rarely ride them. Mostly I drive wherever I go in my Jeep or a simple, utilitarian, Chrysler four-door sedan. I preach and I call and I witness and I counsel. One of my most important jobs is to show people how they can live free of guilt and shame, no matter how dark or troubled their past has been. Sometimes I tell them this: “When your sins are confessed and forsaken and they are under the blood of Jesus you are living under the mercy, free as a boy with a new bike on the first day of summer riding with the wind in your face not a care in the world.”

That’s what I tell them. And I can smell spring somewhere down deep in my very own soul.