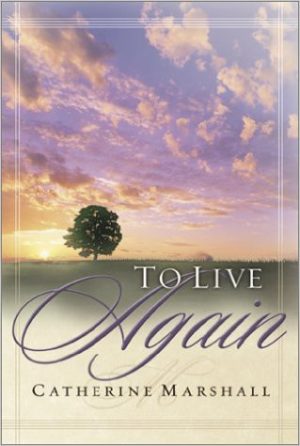 Lynn was recently widowed. She and her husband Phil were members of Evangel. I baptized both of them and helped them deepen their walk with God. They had a sweet and loving marriage. She told me how Phil would tend to her needs and help her. He would dance with her in the kitchen as they would prepare meals together. Lynn told me they loved to hold hands. That was one of the things she missed most when she came to church. He was not there anymore to hold her hand.

A few weeks ago I gave her a copy of A Man Called Peter, by Catherine Marshall and a sequel that she wrote—an autobiographical account how she dealt with her own widowhood call To Live Again. Lynn had written a passage from the book on a card to encourage her as she worked though her grief. It was a description of how the Lord assured Catherine Marshall that her husband was still very much alive in the presence of the Lord. Here is what Lynn wrote on the card:

“I thought of an incident that had taken place seven days prior to Peter’s death. He and I had been visiting friends in a nearby city. Their guest room had twin beds. Sometime after the lights have been turned out and we had gone to bed, long after the house was quiet, suddenly I had put out one hand toward the other bed, and found Peter’s hand stretched out in the darkness waiting for mine.

He had whispered, “How did you know that my hand was there?”

So now the space between us was wider, much wider greater than the distance between any twin beds. It’s stretched all the way across the eternities that divide the world of the seen from the world of the unseen. Somewhere out there in that emptiness, an outstretched hand was waiting for me.”

When you lose a believing love one in death, for those of us who know the Lord, we can be confident that they are waiting for us to celebrate a reunion in the presence of Christ that will never, never end.

“The hope (confidence) of eternal life, which God, who cannot lie, promised before the world began.” (Titus 1:2)

Sometimes the Fish Catches the Boy

A Mother Who Would Not Quit!