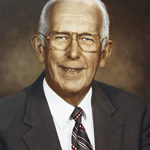 Recently I was reading one of my Dad’s sermons published on his web-site and stumbled on an anecdote that warmed my heart. It’s a gem and shows the character of my Dad and the Dad of Dr. David Jeremiah who has been so powerfully used of God. Dr. James T. Jeremiah was the president of Cedarville College when my dad was a student there. I was born while Dad was a student there.

Here is the story in my Dad’s words:

“My friend and classmate in school had a young family and needed a loan of $75 to stay in school. The loan company would loan it to him if he had a co-signer to cover their loss in case he defaulted. Dave (a pseudonym) knew I had a job and asked me if I would stop down to the loan company and co-sign his loan.” Ken, I’ll pay it off. It’s only about $7.50 a month for a year or a little more.” I readily agreed. Dave was from New York and had a young family like ours.

That was the least I could do, I thought. Dave and his family attended Emmanuel Baptist Church where I was Sunday school superintendent.

Some weeks later, the day came when word spread that Dave had moved out of his apartment in the middle of the night, and had dropped out of school and had gone back to New York.

The loan company sent me a letter. So, I tried to work out a payment.

That week, the school office notified me that Dr. Jeremiah, the president, wanted to see me. After my last class I came to his office. He had me come in and take a seat. He was at his desk. “Mr. Pierpont, I understand that you owe the loan company downtown some money as a co-signer for a loan on a student who has dropped out.”

“Yes, sir, I did sign for him. And I’m going to do everything I can to see that they get their money.”

Dr. Jeremiah opened his Bible and looked at me. “I want to read you Proverbs 11:15. Do you know what it says?”

Then he read these words: “He that is surety for a stranger will smart for it.” Did you know Dave very well? You didn’t did you?

“No, Sir. But he needed the money,” I said. Then, trying to sound brave I said: “But I still think should have helped him.”

President Jeremiah gave me a kindly look and smiled. “I see. Well, an anonymous donor has paid this loan off for you. I called you in to tell you that.”

I was stunned and rose and thanked him over and again.

Dr. Jeremiah could tell that I was a brash young man. He probably wondered if I had learned anything. He could have lectured me on my lack of judgment. Instead, he gave me a smile and a gentle hand shake and allowed me to go on my way.

Only later did I realize that, in all probability, the president himself, may very well have been that donor.”

So, you see, My Dad knew David’s Jeremiah’s dad and was blessed by him. These men are the kind of man I want to be by the grace and help of God.

Where Can We Go?

Lord, I’ll Serve You Even Though I Can’t See You (Sermon) Video