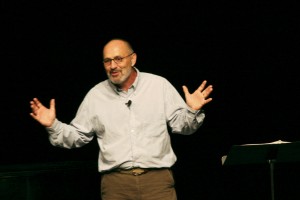 I believe all preachers and teachers of truth should be concrete and clear in their communication. They should answer the questions:

I have learned, the way God has gifted me, that telling stories is a powerful way of doing that. Not all good preachers and teachers are good storytellers, but those who don’t choose to use them should be clear and concrete and they should avoid blanket statements condemning or denigrating those who do.

How I came to love stories is one of the best stories I ever tell. I’d be flattered if you would read it. You can read that here. I’d be especially enriched if you would send me a complimentary note…written on a twenty-dollar bill. But the story of how I came to love stories has many chapters. It’s a book I hope to be writing for years to come. If I add a chapter do you promise to read it?

A Spring Night in the Ohio Countryside

Years ago in central Ohio a friend invited me attend special meetings at a country church. We drove through hill farm-country in fragrant spring to the little stone church. I didn’t expect much. I was in for a pleasant surprise. My imagination was ignited that night by a story-teller. His name was Tommy Oaks.

Tommy is from Tennessee. I hear he is the first man ever to graduate with a Master’s Degree in Story-telling from East Tennessee State University. I love the sound of that, though-degree or not- I’m sure Tommy would say you can either tell a story or you can’t. You don’t have to have a master’s degree to be a good story-teller.

He wore a wrinkled shirt with a string tie. He had a salt-and-pepper beard and maybe a little more hair on his face than he had on his head. He moved the pulpit aside and spoke without notes. He had in his memory what he was going to say and he skillfully planted it into our memory. This is what he said;

“When I was a boy I went to church a lot. The preacher always seemed to have three points and a story. I couldn’t tell you what the points were later that afternoon, but I always remembered the story. Tonight I want you to remember what I am going to say so I am going to tell three stories and make one point.”

The third story was slower in telling and serious. Everyone, even little ones, held still and breathed quiet and followed him with their eyes. By the time he reached the end you could start to tell the truth that tied all three of the stories together. It was a profound and weighty truth. It didn’t seem like he had talked for a long time but looking out through the open window you could see that the sun had slipped from sight and the fireflies hovered over the grass. The air was cooler and all of us sitting on the wooden pews enjoyed the silence that a good story produces. We listened like we were smelling fresh bread or slowly savoring a piece of gourmet cheesecake.

Both And: Theological Faithfulness and Storytelling Skill

In the circles in which I run (that’s right I run in circles) we are pretty theologically-conscious. We take a dim view of messages that are not rooted in Scripture top to bottom. We have a carefully-drafted doctrinal position and we like to be able to tell our preachers are sticking pretty close to it. We don’t really think the pulpit is the best place to express our personal opinions or preferences. We like some meat in our preaching. We want to hear someone handle the Word of God with skill and passion.

When the liberal theologians abandoned the authority of Scripture around the turn of the 19th century they substituted moralistic stories about social themes in their place. As a result we often rightly assume that story-teller preachers don’t quite have all their theological marbles. They aren’t always playing with a full theological deck. They are armed but they are no danger to the enemy because their homiletical gun is loaded with blanks.

I met a guy like that a few summers ago. He was a very good story-teller. I was eager to hear him because he was a pastor. He was from a denomination that is not well known for wearing out their Bibles so I was not surprised to find that he was not obsessed with truth. His specialty was tall tales. He sure could spin out a yarn and lay a whopper on you. Sort of a liar for hire, I guess. You could tell from listening that his was a sort of smorgasbord theology, you take what looks good to you and if you see something that you don’t think would taste good to you, you just leave it alone.

After he “told” I talked to him. I congratulated him on his skill and his style. I said; “I understand you are a pastor.”

He must have seen me coming or read my mind. Before I could speak again he offered, “Don’t try to make any sense of my stories. They are strictly for entertainment.”

I smiled politely but the idea went against my grain. I don’t think I have ever told a story without a specific lesson or point. As I see it if you don’t have anything to say that tells me something. You are making the point that you don’t think it is important to make a point. I’m not suggesting you have to assault people with truth. If you tell a good story you shouldn’t have harangue them to get a point across. A good story well-told mostly applies itself. You just lay it on the table and walk away.

My favorite preachers are story-tellers who know the Story of stories and tell it well. The stories of the Bible are often left untold or they are not told well. Secular story-tellers commonly tell tall tales, myths and legends. There is a place for different kinds of stories, but my own niche is true stories. Usually I know they are true because they happened to me, but in my story-telling repertoire I have a few well-chosen favorites that I have picked up from others too.

In my view it is illegitimate to tell stories in the pulpit and inconsistent to try to make a point with them if you don’t believe there is a major “over-arching story” that gives purpose to all the other stories. They say that post-moderns are opposed to an over-arching unifying narrative. That’s too bad because there is a meta-narrative. God is the author of the great story, and it gives meaning to all other stories ever. To reject the big story is to lose your place in the story of God.

Jesus fulfilled the prophecy of Psalm 78 by being a storyteller. You can tell a lot about Jesus by the commands he gave, by the questions he asked, the prayers he prayed, and the stories he told. Do you remember when Jesus told three stories to make one point on Luke 15? You have to agree that in telling three stories he made one of the most memorable points any teacher ever made. The first two stories climax into one of the most powerful stories anyone has ever told–the story of the Prodigal Son. They were three stories of lost things found. In every story everyone rejoiced when the lost things were found, including the Father. At the end of the third story there was a twist–an exception. There was one who would not rejoice–the older brother refused to rejoice. People will be telling those Jesus stories long after he returns. They are powerful.

Men are filled with ambition from boyhood. They want to fight fires, fly to the moon, populate planets, win championships, subdue kingdoms, and capture fame, honor and beauty. I just want to be a really good story teller. My ambition is the Kingdom of God and my calling is to stir people up to press into the Kingdom with the Story and with stories.