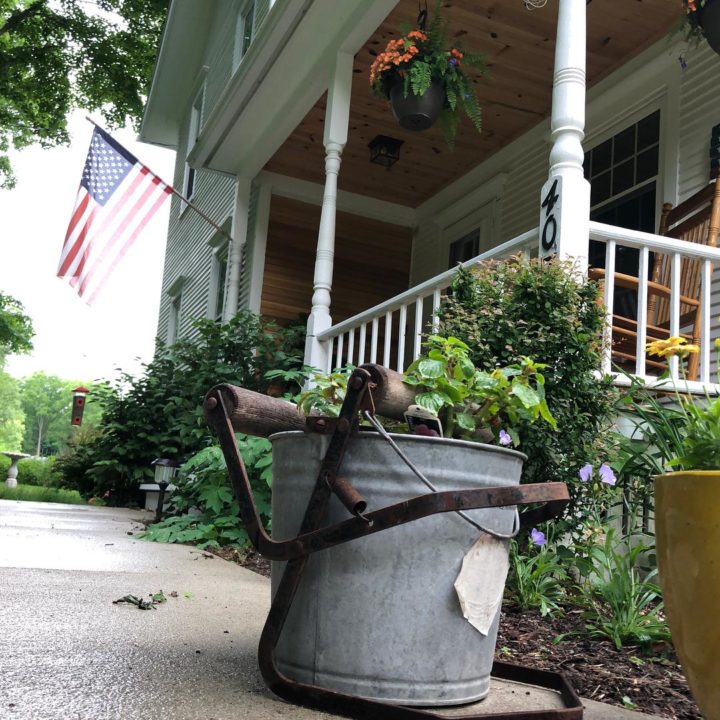 On Bittersweet Farm every day is a beautiful day
and the little light in the kitchen is always on.

July was almost ideal on Bittersweet Farm with warm, sunny days and evenings cool enough to sleep with the windows open. The corn is in the tassel now and we are surrounded by peaceful country sounds.

Our neighbor says he saw a coyote the other night. That is not good news for the turkey population. On my walk yesterday morning I happened upon a deer stand over a path along a stone wall in a line of trees. It will soon be that time of year. I suppose then I will need to go afield in hunter orange.

It’s important to keep a warm and tender heart. Here is a memory aimed to help.

Shall We Gather At The River

I’m still trying to remember what we were doing there. I suppose it was a simple day-off adventure. It was in the days, sweet to my memory, when all the children were still at home. We all slept every night in rooms just a few yards away from each other those days. We took all our simple meals together, usually goulash or spaghetti or tuna casserole or cheap pizza picnics washed down with cans of pop purchased from Woosleys (which they call Bullocks) in Mt. Vernon.

There were ten souls in our household so our lives then alternated between stoic struggle and unabated laughter. Those days were more precious than we had any idea of when we were spending them. I wonder as I key these words onto the screen if one day I will look back on today in the same way.

Come to think of it I am sure we were on one of those simple family outings that day. I liked to call it “following the hood ornament” because I usually had no idea where we would end up thought it usually involved a craft shop of some kind and a bookstore of some kind—these to fuel and to inspire my creativity with stories and words and Lois’s creativity with crafts and such.

The hood ornament led us to a State Park a few miles south of quaint Loudenville—The Mohican State Park.

The roads turn through the park under dark canopies of leafy trees climbing and descending hills. A river runs through it… The Clear Fork of the Mohican River. It follows a narrow gorge most of the way through the park and merges into the Black Fork to form the Mohican.

It’s a beautiful park. There is a picturesque spot where the river flattens out and runs over a shallow bed of rocks. Over that spot is a covered bridge. It’s a beautiful spot. The bridge crosses a wide span high over the river.

I think we might have had some sodas and snacks and we were sitting along the river when some vans began to pull in and park. A large group of Amish or Mennonite families began gathered. The children had wagons and balls and they ran directly to the river and began to splash and swim and play in the shallow water. The men carried baskets to the picnic tables and the woman began to spread out tables full of food. They came ready.

When the food was ready they called the children in. The man moved their clusters of conversation over to the tables. The children gathered ‘round. Grace was said and the group went noisily at their picnic.

Our children finished their snacks and began to play. Lois and I sat and talked quietly—an excuse to watch the Mennonites. They were not low-Amish but Beachy Amish or Mennonite. The ladies all wore pastels. The men word broad breeches. They made a wholesome looking group from where we sat.

When happened next is what burned the memory indelibly into my heart. The food put away, the families all gathered in a circle on the grass. Soon the noise of water running over rocks was playing under the sound of beautiful hymns—well-known and sung a’capella in four parts. It was a beautiful song. It was a winsome sight. There along the river, under the shad of spreading trees and in the sight of the old bridge—they were gathered at the river.

One of the songs they sang was an old song I had sung hundreds of times—but alway indoors—never while gathered at the river. There on the margin of the river the song brought tears to my eyes.

As long as I live I will always seek out a group who have the songs of Zion in their hearts and on their lips. And when my life as we know it on this earth ends I will enter the presence of Jesus were angels roar their praise around the Throne of God.