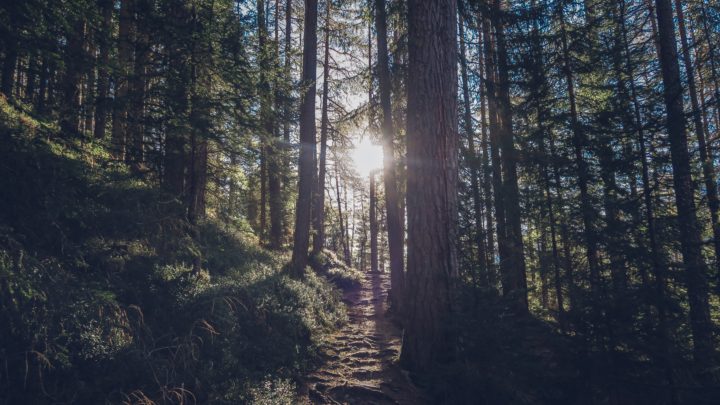 A few years ago I was staying in a mountain lodge high in the Adorondak Mountains of up-state New York. I had been under a great deal of pressure in my work and needed a quiet week away. I found myself becoming a cynical, critical person and I didn’t like it. A quiet, no-pressure week in a lodge over-looking a mountain lake was like a long drink of ice-cold spring water to my spirit.

I had an experience while I was there that changed the way I looked at life. It was on Wednesday morning. I was awakened by the sound of song-birds playing on my window sill and the first thing I remember that morning was a light flurry of air rustling the curtains. Rays of sun shining through the pine branches painted a mottled pattern of light and shadow on the hardwood floor. My running shoes waited at the foot of the bed. I pulled on some shorts and laced the shoes on my bare feet. I left my watch on the dresser and slipped into a running singlet.

The aroma of coffee wafted up the stairs from the dining room but that would wait. I made my way out onto the wide veranda overlooking a pristine blue lake to stretch. Speaking to no one I longed for the quietness of a wooded trail. I walked toward the mouth of the various trails leading off into the timber. The words “High Trail” and “Low Trail” were routed in a redwood sign. I took “High Trail” thinking of lines from a poem by Robert Frost about the difference the choice of a trail can make. I had no idea of the significance of my choice that morning.

I ran easily along the path enjoying the feel of the pine needle cushion beneath my feet. It was early and the dew on the towering pines scented the forest. I filled my lungs over and over with the crisp mountain air. Weaving between the pines the path opened out onto the lakeside and traced the shoreline for at least a mile. I matched my foot-falls to the rhythmic lapping of the water on the rocks. The early morning sun silhouetted a lone sailboat cutting the glassy surface of the water. Further down the trail a father and son silently fished a little cove from their boat.

The path turned away from the lake and climbed gradually up through a stand of hardwoods. A brilliant yellow goldfinch flew along the path for a moment. The forest floor was covered with ferns and wildflowers. Huge rocks jutted up from the earth all around. From one of them a large pine had somehow taken root and flourished. The path threaded between a rock about the size of a small house and a sheer cliff. As I rounded the rock and looked ahead, a doe nursed her speckled fawn in the path directly ahead. They gracefully bounded away up the slope when they saw me.

For a while the trail followed a high ridge. It afforded a breathtaking view of valleys on both sides below. I could see a small house in the distance. A brook lay in one valley like a shinning ribbon. In long lithe motions a fly fisherman plied its waters for trout.

The longer I ran the less exertion I felt. A tingling euphoria crept over me. I felt as if my feet were only brushing the path. Other runners had spoken of this sensation, but I had never experienced it before. I had no desire to stop.

Still running along the ridge I heard voices calling to me from below in the other valley. From a distance I could see a pool of water far below. The people calling to me were swimming in it. A stony by-path descended to its bank. I climbed down to them. As I approached, to my disgust, I realized they were swimming in a pool of stagnant water. Splashing and laughing, oblivious to their foul environment, they begged me to join them. A green film covered a third of the surface of the pond. An unmoving fetid atmosphere filled the valley surrounding the repulsive lagoon. I could see leaches clinging to some of the swimmers. Gagging I turned to climb back to the high trail. I gulped the clear air when I reached the trail above like a drowning man.

For a while a had trouble returning to my earlier cadence. Why would anyone want to swim in the swamp when they could run the mountain trail? How could they endure the stench and the contamination of the repulsive slough when there was such a paradise of nature nearby?

There were stunning vistas ahead. I stopped high on a crag where the magnificent view took my breath away. From my stony perch I could see for miles. High Trail cut through pine forests, fields of wildflowers and over boulders, then crossing a long swinging footbridge over a plummeting gorge it ended back at the lodge. The run was like a long, beautiful symphony rising and falling, sometimes loud and fast and sometimes slow and sweet, a counterpoint of melodies. Thundering waterfall and lilting bird song. The placid surface of a lake broken by a leaping fish. A mammoth pine, ferns growing at its base with hair-like leaves. It was a luxurious run.

Not realizing the trail was a loop I was surprised to be back so quickly. Since I intentionally left my watch in my room I had no idea how long I had run. It seemed like a short jaunt but I had been gone over an hour and a half.

The dinning room was empty when I returned. Breakfast was over and the other guest were playing volleyball on the lawn. I dressed and spent the rest of the morning reading on the big shady porch. Growing hungry, I exchanged my book for a walking stick and made my way toward the little village for lunch.

A quaint string of shops lined the village’s only street. A bakery, a post office, a dry goods store. The bait shop and barber were the same. Locals gathered there to kibitz and tell lies over a game of checkers or just sit idly on the boardwalk in front and smoke. Where the string of shops ended a tree-lined residential street began. The last store and first residence belonged to a little family operation which sold sandwiches and coffee. I devoured both. Besides a few berries I enjoyed on my run it was my first meal of the day.

While I was eating a little old man with a leathery complexion shuffled in. He ordered a coffee and looked for a place to sit. The sandwich shop was full. The only seat available was across from me. I nodded to him to take it. He sighed as he lowered himself into the chair.

“This time ‘o the year you can hardly turn around in this town for the ‘torusts,” he said, not looking up; “You one of ’em?” “Yes, I’m staying up at the Wulpert Inn for the week,” I replied, “Yours is a lovely town. You must be used to tourists by now.” “Well,” he said; “I’m Dale Calhoon my people have made their home in these parts since the only people here were trappers and other such fools but ya’ never quite get used to ‘torusts” “Four generations of Calhoons has been guides in these mountains,” the old man said with a sparkle in his eye, “I spose’ I know every inch ‘o trail ‘tween here and Lake George.”

“People is stranger then wild animals since city folk invaded these hills. Wad’ ya see”

“It was people swimming in the foulest swamp you’ve ever seen. They asked me to join them. There must be hundreds of clear pools fed by mountain streams around here, why would they do that.?”

He looked me in the eye for a long time without speaking then he unsnapped the flap on the breast pocket of his jacket and pulled our a worn and yellowed piece of paper. “I haint never done this before, but I want you to have this,” he said, pushing the paper across the table to me. Then he got up and shuffled to the door. Leaving he turned and said; “Them trails hasn’t always been called ‘High Trail and Low Trail.” Then the strange old man was gone.

That night the temperature fell into the low forties in the mountains. I found a comfortable leather chair near the fire and gazed into its relaxing flame. The popping of the wood was soothing. The cherry and apple wood burning were fragrant. I felt something in my pocket and drew out the paper the old eccentric had given me. It had slipped my mind. I studied it for a while. It was an old map scratched out with a quill pen. Something about it was oddly familiar. Than I realized it was a map of trails leading away from the Wulpert’s Inn. The Inn was labeled “The Calhoon Place” and the hight trail leading away was called “Praise Heights.” The low trail was called “complainer’s swamp trail.”

Where Have You Been All My Life?

I Brake for Christmas

A Mongrel at a Dog Show