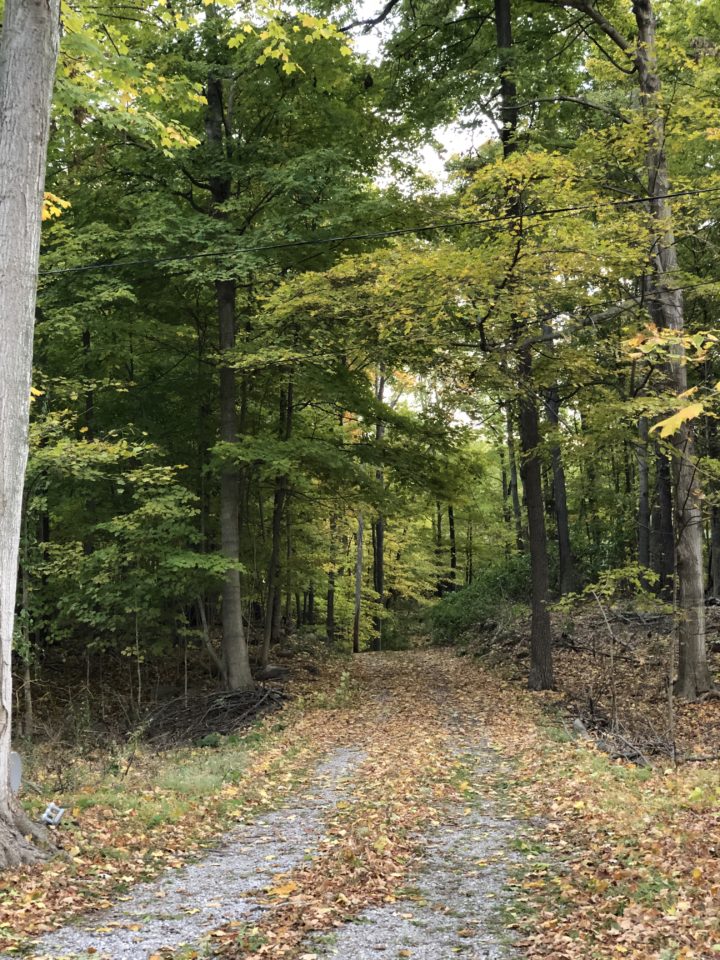 The Walnut trees (and there are many of them) are bare of leaves. The Maples on Bittersweet Farm and in the forest across the road are bright yellow in the rain this weekend. Within a week we will turn from October to November and they will be bare too. It’s always hard for me to see October come to an end, but I will never let the frost or thought of snow and cold dim the glory of autumn in my soul. Never.

This week I want to share a story I wrote in 2001. This story was published in Chicken Soup for the Soul. So, you see, I’m kinda’ famous. Did you know that.

Friday I drove out and sat at the bedside of a dying saint. Her husband passed in July. She’s gone to be with he and their Lord now. She lived almost to the end of fall and went to the land where we’ll never grow old. He mind is clear now. Her husband built her a big picture window right over the sink where she could look out over their farm. They were married over 70 years and they were still in love when he passed. I wonder what it looks like now in the land made by the One who created Octobers.

I hope you are will, you enjoyed a beautiful October and your heart is ready for Thanksgiving. Here’s my story for this week. It is special.

He was a farmer, a factory laborer, and a country pastor. He worked hard and lived simply and loved his family. He could be a good neighbor, too. He farmed a small hill-farm and raised beef and some grain for feed. In the summer his grandchildren would come and they would bail hay, fish the pond and eat sweet corn and garden-ripe tomatoes.

When harvest-time came he would piece together his old one-row corn picker and oil it up for the season. It had seen many seasons. He pulled it behind a little Ford 9-N and hooked a wagon on the back. It was a noisy contraption unlike these huge modern green monsters you see shaving the grain off wide, flat fields in wide gulps these days.

His whole operation was like that. Basic. His life was like that, too. He worked hard, helped others and you could count on him keep his promises. That’s what made it so hard one autumn when time and responsibilities and difficult circumstances closed in on him.
He needed to harvest a few acres of his own corn. He also promised to harvest a few ribbons of corn that wound around the hills on a friend’s farm, too. Problems came. First equipment trouble. Usually he was able to fabricate something or rig the equipment so the job could be done but after he had harvested his own corn his little corn picker coughed, sputtered and quit. It was out of use until a special part came from distant lands and that would be too late to help this year. Then the equipment problem was followed by a time problem. The factory had orders to fill and began to require overtime. He was leaving the farm before light and arriving home after dark.

He sat at the kitchen table and nursed a cup of awful coffee while he wondered aloud what to do. His wife said that there was simply nothing he could do. He would have to tell his friend that he couldn’t help with his corn. He thought long and the idea didn’t set well with him. His friend was depending on him. “If you don’t have the equipment, you just can’t do it,” his wife said. “Well, I could do it the way we used to do it. I could harvest it by hand.” “You don’t have time to do that with the overtime, besides it would be dark.”

He consulted the Farmer’s Almanac. Late in October there would be another full moon. It is called the harvest moon because it gives farmers more light and increases their harvest time. If the Lord gives us clear weather, I think I can do it.

And he did. The weather was cold and clear and the moon was brilliant. After work he made his way to the field and his wife met him in the truck with dinner and a thermos of more of the awful, strong, black coffee. Then he worked through the night to keep his word.

Late one autumn in 1958 he had a grandson. He and his wife got in their car and drove across the state to see him. They would share the same name. Kenneth Pierpont.

I know this story well, because the farmer was my grandfather. I’m proud to have the same name as he did. I’ve spent hours on the fender of the tractor with my grandpa. I’ve even suffered through some of that same awful coffee. But I had never heard about this incident until I was having a talk with my grandmother one day about values she and grandpa believed very deeply in. Hard work, and keeping your promises.

My grandpa did work hard and keep his promises. He also loved his family. I am proud to have his name. Sometimes, when I am tempted to cut corners or defer responsibilities, I think of my grandfather out under the harvest moon bending low and swinging his sharp corn-knife in a wide arch. I can hear the thump of ears of corn hitting the floor of the wagon and the music of geese honking their way across the cold October sky against the brilliance of the harvest moon.

In the dark early hours of the morning, when his work was done He crawled his tired body up in to the seat of the old tractor and made his way home. Behind him in the pale moonlight, I can see row after row of corn shocks standing at attention in respect for a man who keeps his word.

A harvest moon shines overhead
And soon we’ll make our way to bed.
The corner of the quilts turned back,
We’ve finished up our evening snack.
The fire fills the room with light,
And warms the chill October night,
Throws shadows on the corner nooks,
Illuminates my treasured books.
The fragrant smell of smoldering leaves
A hundred memories retrieves,
Like incense wafts into our hall
And subtlety declares-“It’s fall.”

Winter’s Coming Summer’s Past
Football games and burning leaves
Frosty pumpkins, turning trees,
Children skipping off to school.
Days are getting crispy cool,
Apples ready for the mill
Leaves raked up into a hill,
A flock of geese flying south,
The taste of cider in my mouth,
Lead me safely to forecast
Winter’s coming -Summer’s past.

Crisp autumn breeze
A swirling spray of colors
tumbling on the ground.

A little boy
Fair-haired, a missing tooth
Eats apples with his dad.

Bittersweet Farm Journal (Number 78) What Will We Wish We Could Do Again?