Lois and I were gifted a flight into Portland and a trip out to the coast of Oregon. Our oldest daughter lives there with her husband Jesse and first-born Aiden Redemption. Last week they had a baby girl. Her name is Bella Allene. Mom and baby are healthy. Lois helped Holly get her new routine in place and we all enjoyed some time together sitting by the glowing Christmas tree, listening to the coos and cries of little Bella and letting Mr. Aiden Redemption entertain us with his antics. (Shortly we will post some pictures of Bella here). The coffee out here is pretty good, too.

The little piece that follows was written by our son Chuk as an introduction to a sermon he preached last night at the church where he serves as youth pastor here in Michigan.

Peace On Earth?
by Chuk Pierpont

Well it’s that time of year. The time of year when ovens fire up filled with goodies and treats that will only be had in December.

It’s the time of year when tree farms that stood silent during the tree planting season fill with hoards of happy people looking for that perfect tree to adopt into the family for the next month.

It’s the time of year when you carry a plate of cookies over to the neighbors—the ones you haven’t had the time to catch up with this year—and you let them know that you are still there, across the street, and that you care about them.

The time of year when folks will dance merrily to “I’m Dreaming of a White Christmas,” even though they hate the snow.

It’s the time of year that even the backwoods boys who haven’t seen the inside of a store other than Ace Hardware, wander the aisles of Nordstrom looking for the one thing that will bring delight to their wives on Christmas morning.

It’s the time of year folks think deeply on the incarnation of Christ. God becoming man.

It’s the time of year when parents sit their children down on the couch and seniors wrap in a blanket and read quietly a story like this one.

“And in the same region there were shepherds out in the field, keeping watch over their flock by night. And an angel of the Lord appeared to them, and the glory of the Lord shone around them, and they were filled with great fear. And the angel said to them, “Fear not, for behold, I bring you good news of great joy that will be for all the people. For unto you is born this day in the city of David a Savior, who is Christ the Lord. And this will be a sign for you: you will find a baby wrapped in swaddling cloths and lying in a manger.” And suddenly there was with the angel a multitude of the heavenly host praising God and saying, “Glory to God in the highest, and on earth peace among those with whom he is pleased!”(Luke 2:8–13, ESV)

That’s it. Peace. I think that’s what this celebration is all about. Peace on earth. That’s what folks are trying to find during this festival of God became man. They are looking for peace.

But quickly December’s feelings of peace turn to a January of resolution. You are back to the grind. You are angry in traffic again.

The wife who worked so hard to make you happy on Christmas morning is now angry again and you wonder if your marriage will make it to next Christmas.

The husband who loved you and worked hard for you is gone. The family that visited in December is back home and you find yourself alone again.

Your children are making terrible choices and you stay awake at night in fear of what will happen to them.

The factory you work at has found a much cheaper way to make their products in china and they wonder if they are going to move the factory there.

Where is the peace on earth that the angels sang about. They promised this boy would bring peace on earth. What did they mean? How do you get there? 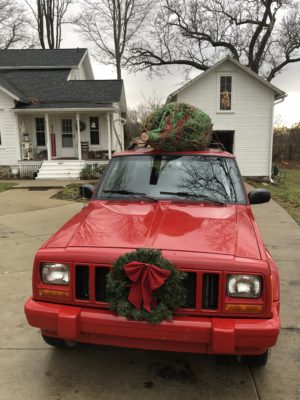 In the message Chuk went on to explain that the peace the angels promised comes though Christ like this:

—When we are justified (saved, born again) we have peace with God.
—As we are being sanctified (growing in holiness) we experience the peace of God within.
—When we are glorified after the return of Christ there will be peace on earth—in the millennial reign and in the ultimate Kingdom of God-the eternal state.

It could be expressed this way: Peace on earth comes initially though the offer of a spiritual, inner kingdom and ultimately through a literal physical eternal kingdom of God on earth. Both will be fully realized by all who believe and are saved.

This is what we want to keep in mind and close to our hearts when we think of the beautiful announcement of the shepherds: The peace our hearts so desperately long more will come for those who believe in Christ in wonderful stages ending in ultimate and eternal peace in the presence of Jesus Christ on earth as King. To keep that in our hearts is the heart of Advent.

I hope you have that hope. That hope is what makes Christmas Christmas.