It’s the second day of spring out here on Bittersweet Farm. Saturday night the sky was clear and the moon was bright. I stepped out into the night about ten p.m. and coyotes were in the field just west of the house howling ferociously. I go back inside and our dog Hazard is lookin’ at me, trying to get me to share my frozen pizza with him. I don’t beg for his food. I finish my pizza and pick up a book. He growls and tosses his toys around trying to get me to put down my reading and play. If he doesn’t curl up at my feet and go to sleep soon… well, let’s just say it this way. Next month he is going to turn ten, if I don’t send him out to play with the coyotes.

You might want to brew some coffee or tea, I got a little wordy this week.

I loved to read dramatic conversion stories when I was growing up. I still do. They make inspiring reading. They would go something like this:

“I was a great athlete/actor/singer, etc. I had fame, fortune, opportunities to travel the world and make a name for myself, but I gave it all up to follow Jesus.”

Or maybe they would say something like this: “Before I was saved I had women. Boy did I have women. I had a different woman every weekend. And did I ever drink and take drugs. I took… (insert long list of drugs taken or drinks consumed).”

Sometimes I listened to their stories and I felt like their life really did seem pretty colorful before they were saved, but I wondered if they maybe missed it just a little.

One day many years ago, when the children were young, I gave up golf. I just sold my clubs, gave Lois the money as a gift, and told her and the children I would rather be with them then spend hours on the golf course alone. It really wasn’t a great sacrifice. It was pleasant to have a good reason for a long walk on a beautiful spring morning, but little more. I never regretted that decision, but there were a few occasions after that, when I would drive by a well-maintained emerald-green golf course. I would slow down and remember my golf days and, for a few seconds, I would miss my old golfing days.

That was the impression I would often get when I would listen to some of those conversion stories—It was almost as if they were slowing down as they passed the golf course and lowering their window and closing their eyes and smelling the clippings from the green and remembering old times with a wistful nostalgia. They were a little too entertaining sometimes. They made your normal Christian life seem kinda’ lackluster.

My Own Conversion Story

I was saved in family devotions when I was five. I knelt at the couch, confessed my sin and professed my faith in Christ. So I don’t have a very interesting testimony of dark things I did before I was saved.

I did spit my unwanted candy behind the dresser and lied about it when my mother confronted me once.

I sometimes disobeyed my parents when they sent me to bed. I read my Sunday School paper in bed at night with a flashlight under my covers when I was supposed to be sleeping.

I made up stories that weren’t true because I loved it when people paid attention to me. (There was a boy at camp last summer who entertained his whole cabin with a a scandalous lie… The lie quickly spread all over camp. It included crimes in gratuitous detail.

I pulled him aside and I told him, “There is nothing wrong with telling stories. Jesus did it himself. He even told stories that didn’t happen. He made up stories. But they were pure and honorable stories and he never tried to pass them off as if they had actually happened.”

I told the boy, “You could come back here someday when you are my age and you could tell stories all week and they would feed you and give you a special place to sleep you wouldn’t have to share your room with anyone else and you would have your own shower and wouldn’t have to wait in line. You would have your own private room and there wouldn’t be any bad smells in your room at all unless you made em’ yourself.”

Anyway, I did sometimes make up stories to get attention. I did love attention. Still kinda’ do.

To be honest, I talked too much in school. This was a serious and recurring problem. You can see this on every single grade card in every single school, with every single teacher. Dad would say; “Kenny, when you say something, make a mark on a paper. When you have made three marks, stop talking. In my line of work today, I spend a lot of my time in meetings. I still like to talk, so I always try to remember my Dad’s advice. I’m working on that.

When I was a child I didn’t rebel, run away, or shoplift. I didn’t cut myself or others. I didn’t cuss, except for a month or so in the third grade but I prayed and the Lord took that away from me and it never came back. I didn’t murder anyone. I did continually pick on my little brothers, but I had no intention of ever really hurting them. Sometimes my sister got under my skin but not usually, and certainly not enough to ever make me consider assault or homicide.

I did put some bleach water in a 7Up bottle one time and gave it to my little brother to drink, but I thought it was just dirty dishwater from the sink, so I ‘m not saying I was a good kid, but my testimony was pretty plain vanilla, nothing really scurrilous that made great telling.

I didn’t commit adultery or fornication. That wasn’t very hard when I was small. Girls really didn’t like me. I liked girls but I showed it by teasing them, which I learned later, only irritated them.

I didn’t take drugs, except I think I took a couple doses of Ritalin once after my parents took me to the guy with the pipe and the tweed jacket with patches on the sleeves and the big book of ink blots. My parents were trying to help me keep out of trouble in school —mostly to settle me down and keep me from talking too much in class and they disagreed about giving me drugs, so I think I only took a couple doses. Other than that, no drugs.

I was unpopular in high school so no one ever invited me to their parties or tempted me with drugs. I didn’t smoke or drink but I have to admit that I ate an embarrassing amount of sweets. My financial management as a child is not something I’m proud of. I once spent all the money in my Doggy Bank for gum balls. I discovered a place on the way to school that had a jar of gum balls on the glass counter. They were nice big gum balls. Grape. Cherry. One was a kind of yellow-orange swirl. I loved them at first. For just a minute or two they were so good and so sweet. About the same time they lost their flavor I would get a guilty feeling of regret somewhere between my head and my stomach that took away every bit of the sweetness.

Before I got to school I would spit the big, tasteless wad out of my mouth and I would try to shake the guilt out of my soul, or distract myself from the shame of deceiving my parents and doing what I knew would not please them. Even sharing the gum balls with other did not help. The dark cloud of guilt followed me everywhere I went.

There was a day of reckoning when my dad discovered that I had spent all my savings. He took my doggy bank away gravely and said; “Kenny we are going to give this back when you are mature enough not to spend every nickel you make.”

Dad still has that bank… Kidding. He gave it back before I got married, but no matter how hard he tried he was never able to reform my self-indulgent bent. It never escalated to the level of social damage, crime, or moral degradation, but let’s just say I’ve not really been a model of frugality and self-restraint. I’m better at spontaneous generosity and indulgence. So I’m good at a party and fun to be around, but lets just say I don’t think I’m ever going to featured on the Dave Ramsey show.

All kidding aside; I’ve noticed these days it’s popular to write books about leaving your bad, aberrant, religious upbringing. It’s popular to complain about how your over-zealous religious parents warped you or damaged you, but now you have to it right where they had it wrong. I know that happens and it is particularly confusing to distort following Jesus into something burdensome or manipulative, but that was not at all my experience. 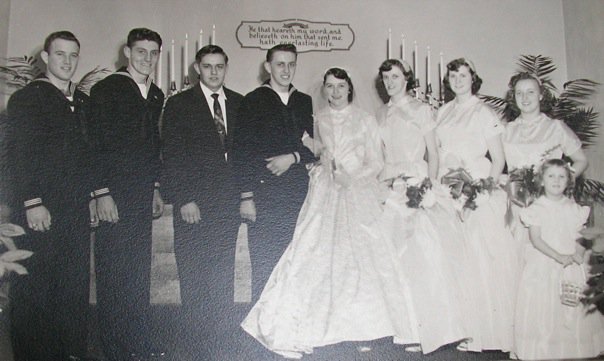 I was raised by sincere, first-generation Christian parents. Their motto was, “As for me and my house, we will serve the Lord.” It was on a plaque featured in our living room.

Our week revolved around the Lord’s Day. On Saturday Dad washed the car and detailed it for the Lord’s Day. On Saturday evening we lined up our Sunday shoes and spit-shined them so we would not have to hunt for them in the morning. There were suits and ties for the men, dresses for the girls. While were were shining our shoes and doing our “Quarterlies” Dad was studying for his sermon and mom was preparing music.

The highlight of our year was a week away at Christian summer camp, when we reached 14 years old we were counselors for another week. We attended hymn-sings, Bible conferences, revivals, and seminars. Our family listened almost exclusively to Christian music. We cherished Christian radio programs like Children’s Bible Hour, Unshackled, The Haven of Rest, J. Vernon McGee, and Radio Bible Class. Our home was always filled with Christ-honoring music and there was helpful Christian literature in every room, including the top of the toilet tank.

We hosted missionaries, evangelists, revivalists and Christian workers in our homes and followed their ministries with sincere interest. We did not make much of collecting baseball cards, but we had missionary prayer cards on our fridge and we used them.

I have no complaints about being raised in a Christian home. I know enough about my dark nature apart from Christ to realize that when I knelt at the couch during family devotions at five years old, and repeated a sinners prayer, I was saved—I was saved from a life of sin. Sin, that would have crushed my spirit, destroyed my life and dragged me into hell forever.

The older I get, the more it is my goal in life to do for my children and grandchildren what my parents have done for us. I don’t really have a dark past, but there is a reason for that.