Good Morning from out on Bittersweet Farm;

Last spring Lois and I were invited to Pine Cone Cottage on Swains lake, the cozy home of Ken and Gigi Wyatt. Ken is a retired newspaperman who is one of our elders at Bethel Church. When we arrived I smiled to see Gigi had prepared shepherds pie for the occasion. We talked for a few hours, but it seemed a few minutes.

Their table overlooks the lake. We finished eating and leaned back and talked of common interests. Soon Ken and I discovered that we had both read and loved Sheldon Vanauken’s A Severe Mercy. I had read and re-read the book for years. Vanauken would often carry on correspondence with people using postcards with small print. Ken got up and walked over to his shelf and pulled the book down. In it was a small postcard from VanAuken written in 1978, a personal note, hand written by Vanauken.

This morning Ken sent me a picture of his original copy of the book and the postcard from Sheldon Vanauken. 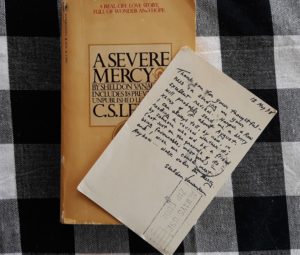 A significant part of the book is a love story between Vanauken (Van) and Jean Davis (Davy). Together they study at Oxford and it is there they find Christ. Van corresponds and later regularly meets with C. S. Lewis. It makes fascinating reading.

In his youth Vanauken turned away from Christianity, but as a young naval officer standing on the bridge of a ship in the Pacific one night contemplating the path of moonlight on the ocean and later, walking at evening and hearing the bells of Oxford, he feels a tug on his heart to reconsider.

“I suspected that all the yearnings for I knew not what that I had ever felt—when autumn leaves were burning in the twilight, when wild geese flew crying overhead, when I looked up at bare branches against the stars, when spring arrived on an April morning—were in truth yearnings for him. For God. I yearned towards him.”

Vanauken begins to read Lewis and others and he is surrounded by bright, magnetic, Christian friends. I love how he describes this in A Severe Mercy:

“These were our first friends, close friends. More to the point, perhaps all five were keen, deeply committed Christians. But we liked them so much that we forgave them for it. We begin, hardly knowing we were doing it, to revise our opinions, not of Christianity but of Christians. Our fundamental assumption, which we had been pleased to regard as an intelligent insight, had been that Christians were necessarily stuffy, hidebound, or stupid—people to keep one’s distance from. We had kept our distance so successfully, indeed, that we didn’t know anything about Christians. Now that assumption had soundlessly collapsed. The sheer quality of the Christians we met at Oxford shattered our stereotype, and thenceforward a reference in a book or conversation to someone’s being a Christian called up an entirely new image. Moreover the astonishing fact sank home our own contemporaries could be at once highly intelligent civilized witty fun to be with and Christian.”

Here is my talk Sunday at Bethel Church, the first message in the Jesus People Series:

Bittersweet Journal (Number 36) My Shadowy Past