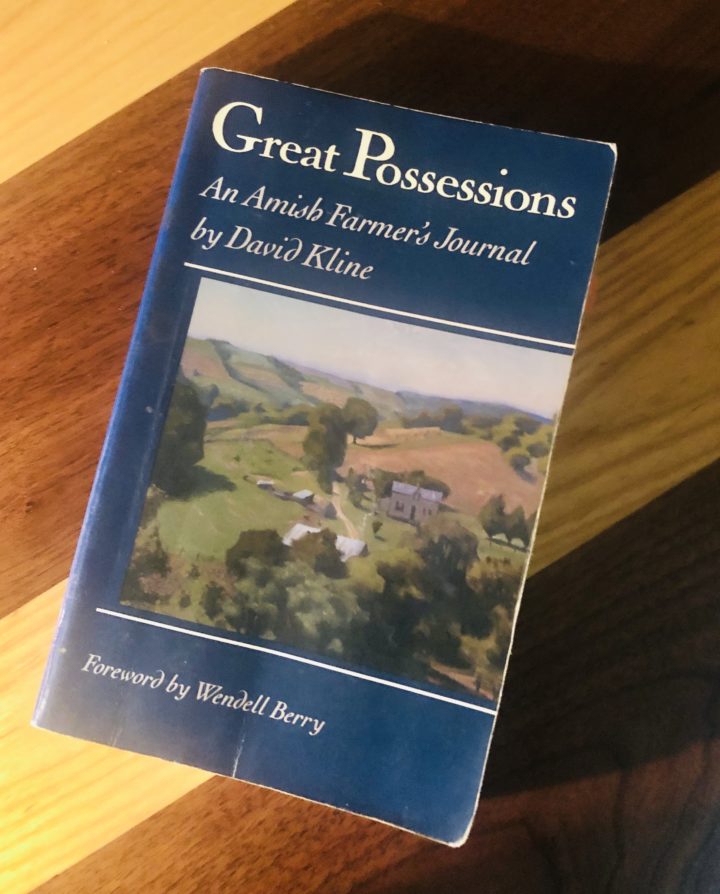 There are two fields that lie just north of our place. I call them the “near north field” and the “far north field.” Beyond them is a woods that shelters a pond. Beyond the woods the Falling Waters Trail crosses running east and west.

Farmer Clark took the beans off the fields north of Bittersweet this golden October afternoon. I had a lunch meeting at Spring Arbor University and took the back road there and back to enjoy the autumn afternoon. In the late afternoon I took George, the Red Jeep, out for a drive through the countryside to watch the start of the harvest.

This time of year I always think back to the October our family returned to the rolling farmland of southeastern Ohio from living in Oklahoma City. I close my eyes and remember the bus ride home from school out to the farm on winding gravel roads under arches of trees bright with color. The air was cool. The sky October-Blue. My little brothers were waiting in the yard in flannel shirts with a football.

Even more than that I remember the autumn of 1994. From 1990 to 1994 we lived in a farmhouse on a dead end road in a peaceful, remote valley in Ohio. About that time on one of our jaunts up into the Ohio Amish Country—Holmes County—I happened on a book that would be on my life-list of favorites. The book was written by an Amish farmer and arranged according to the seasons. Each of the essays was based on something he had observed on his small farm in Ohio. He called the book Great Possessions.

I kept it on my night table and every night before bed I would read a chapter and close my eyes and lie in bed and think about what I had read and wonder why it moved me so deeply. We knew we would never be able to purchase the place we were leasing, but walking in the snow on a hill overlooking the farmhouse on a winter night, warm light within spilling out on the snow, something stirred within me and I prayed that one day, if it be God’s will, we could have a modest country place of our own.

What I did not know is that I would move to a small town then, of all places to a hotel in downtown Flint, then a working suburb of Detroit before, as a smiling providence to counter a season of slander and betrayal, God would give us our own farm house in the country.

Now on October nights I don’t long for the country or the moonrise or the fragrance of burning leaves. I don’t pine for the sight and the sound of geese passing before the moon. I don’t imagine a silver brook running under scarlet maples or whitetail deer grazing in the field. I don’t imagine that and dream of that and long for that and pine for that, I experience that every single day of my life.

Sitting in my reading spot in the southwest corner of the living room I page through my original copy of Great Possessions and come upon a receipt used as a book mark. It is from Dale’s Cardinal in Danville, Ohio. It is dated November 24, 1994. It was a Monday, my day off. At about quarter of two in the afternoon I bought nine dollars and twelve cents worth of groceries. It looks like we had goulash that night and maybe cookies for dessert.

The trees on the hills between Danville and Apple Valley Road were bare by then. It was 50 degrees and sunny as we drove the undulating hills to home. The temperature dropped down to 37 that night. The furnace would have kicked on. There were only eight of us at the time. Wes would come along in a little less than a month and Hope would complete our family five years later after we moved to Michigan.

A friend of mine and a teacher in my grad school taught me this: “When God is going to do something He puts a prayer burden on the heart of a believer.” This is one of the reasons that I have learned to pay attention to the things that I have a strong inclination to pray about. You never know the plans God’s has for you. These are some of the things that I’ve been thinking about home alone with a favorite old book on a cool autumn night.