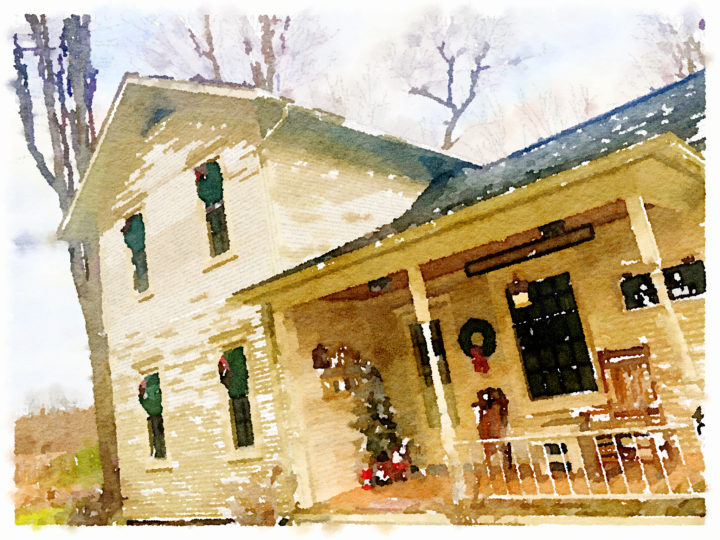 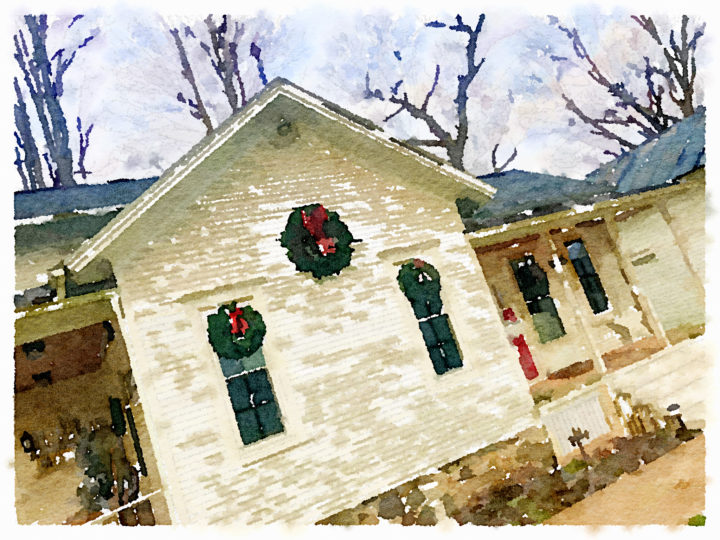 Out on Bittersweet Farm we are waiting for Christmas on tiptoes. Some of the family will be with us on Christmas Day a week from tomorrow. There is a dusting of snow on the ground and the sun is shining out over the south woods into the window over my right shoulder. At Bethel there are two more services before Christmas, Sunday morning and the Christmas Eve Candlelight Service. This year we will welcome the worshippers with luminaries to light their way to worship the Christ-child. We will end the service with hundreds of candles lighting the building and with the singing of traditional carols to embed the story once again into the hearts of people.

Early this morning I was reading a journal entry from January 2004 where I described living in a John Sloane house in the country and writing at a desk in an upstairs room. I prayed for it, giving that desire to the Lord; “Nevertheless, not as I will but as you will…” It was God’s will. Today I have such a home and such a room and such a desk under the window looking out over the south woods. God has been good.

I’ve crafted a Christmas story for you that has been growing in my heart for a few years. I hope it brings some Christmas to your soul… 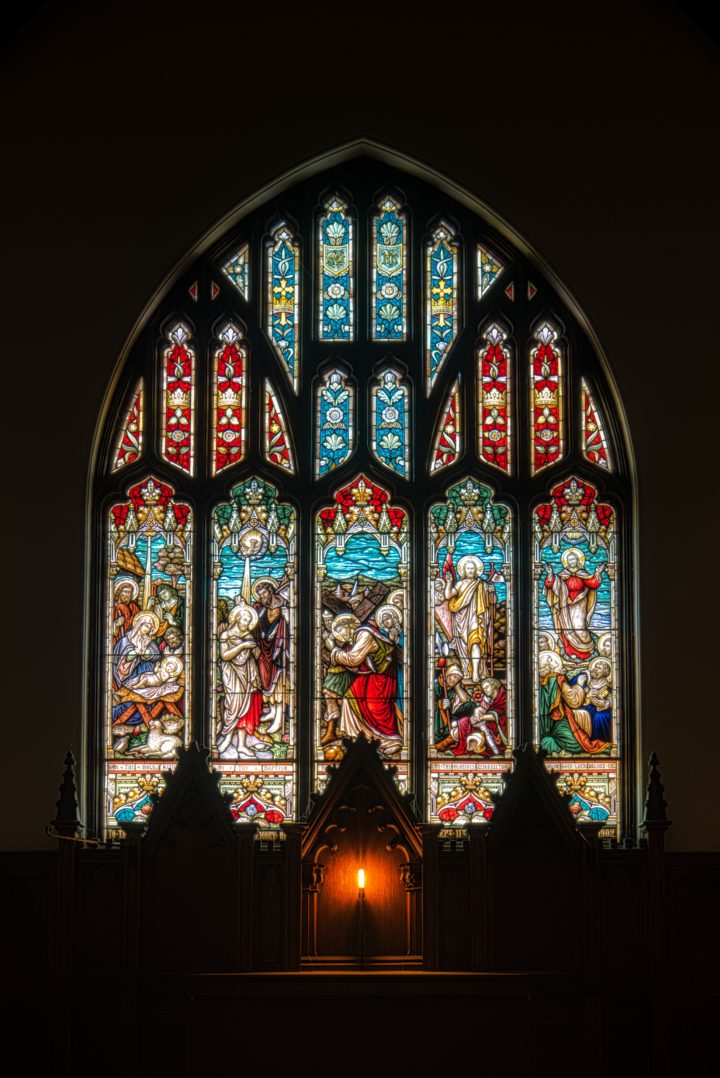 Perry liked the idea of Christmas in movies and books but his Christmases had never been anything like the ones in movies and books. He grew up in a home with equal parts of anger, alcohol abuse, and pitiful attempts at love year ‘round. Those elements were even more intense at Christmastime.

Now he had wife, Liz and a son Tyler, and he wanted things to be right for them. It weighed on him as he walked along the street toward home. He could feel the cold through the soles of his shoes. He could feel the wind biting at him through holes in his jacket. His head and hands were bare. He thrust his hands deep into his pockets and played with the change—the proceeds from redeeming a garbage bag full of pop cans at the liquor store. This was all that was left after the bills were paid and Christmas was two days away.

If he could just get a few groceries for a home-cooked meal and some cookies, a small tree and a gift for Tyler. Tyler was three. He wondered what a three-year-old could remember. Would he be able to afford a gift and a tree and a meal so his boy’s first Christmas memories would be happy?

His spirit was dismal but the city around him was aglow with Christmas and covered in a perfect blanket of white. He was six blocks from home. His spirit was heavy…

He was walking along a route he had walked hundreds of times before but tonight something was different. The massive building on his left was a huge stone church usually dark as a tomb. He had never seen the building at night when it wasn’t dark. Tonight light shown from within through stained-glass windows throwing colored patterns on the snow.

“Well, how about that! They are open for business tonight. They must be warming up for Christmas Eve,” he thought. He didn’t usually let his mind dwell on God and heaven and hell and angels and devils. He had other things on his mind.

He hurried on to the corner and for the first time ever looked up to read the church sign. “Christmas Eve Candlelight Service. 6:00 p.m.” Beside the sign was a manger scene. Mary. Joseph. Shepherds. Wise Men. A baby doll was wrapped in a thick blanket and laying on the hay in a wooden manger. He stood for a moment and looked at the baby.

He smiled. “Why not?” he thought. He took a deep breath as if he was about to jump off a cliff into cold water and said, “O.K. Baby Jesus, if you are real I need some help here. Could you hook me up with enough money to get tree, a gift for Tyler and a meal on Christmas? I would really appreciate it.”

He smiled again and thought—“Hey, it’s worth a try. Who knows. Maybe someone is up there listening.” He chuckled under his breath and wondered if what he said really counted as a prayer. He didn’t have much experience in these things. Maybe it was just hot breath rising up into a cold night.

A man sold Christmas trees on a vacant lot across from the church. He stood by a fire. The smoke and the pines perfumed the air. The lot was illuminated by a makeshift rope of bare light-bulbs. The sound of Christmas music hung on the air. The old fella’ by the fire wore a worn cap with the flaps pulled down over his ears. He smiled at Perry and gestured toward a sign that read. “Free hot cocoa and peppermint sticks.”

“Why not,” he thought, crossing the street.

“You look cold,” the man shouted over the music. “Warm up by my fire and help me drink some of this cocoa.”

“Thanks. Thanks so much.” Perry stood there with the old man quietly and they sipped their cocoa, listened to the music, and looked out on the street and across at the church. Horns sounded in the distance.

“Can I interest you in a tree?”

“How much are they?”

“That is about forty-five dollars over my budget,” Perry said, chuckling.

Just then a black BMW whisked up to the curb and a young man jumped out and strode onto the lot. “Merry Christmas men,” He shouted.

“I’d like the tallest tree you have. We have a new house this year with a cathedral ceiling.”

“Well, I’m sure I have just the tree for you. Do you have a way to get it home?”

“I’m working the lot alone this year. My partner had an issue with his ticker. He took off for Florida just after Thanksgiving. Couldn’t help this year. You can borrow my truck if you know how to drive stick.”

“That’s a problem,” the young man in the BMW said. “But if you can figure out a way to deliver it I will make it worth your while.

The old man turned toward Perry. “Son, you wanna’ watch my lot while I deliver this? Or can I hire you to deliver the tree? If you deliver the tree you can pick out a small one for yourself. Do you drive stick?”

“Since I was ten.” Perry said, “You have a deal. I’ll do your delivery. You stay here by the fire.”

Perry loaded a huge fir into the back of the truck and followed the black BMW up into the hills on the nice end of town. He helped wrestle the tree through the double front door and set it up. It towered up toward the ceiling in front of a two-story arched window. He trimmed away some of the lower branches, and helped get the strings of lights working and stung them on the tree.

“I really better be going, Liz is going to wonder what happened to me.”

The young man stepped toward Perry extended his hand. “Thank you, friend. Thank you very much. I don’t think I could ever have gotten those lights going.”

In his hand he felt a small square of folded paper. “You don’t have to tip me. I’m getting my own tree out of this deal.”

Without looking down Perry slipped the bill into his pocket and walked back to the truck. The cab was warm. He paused in front of the house. The tree shown through dozens of panes of glass in the big arched window. For a minute or two he looked out over the city aglow with Christmas and listened to the carols on the radio. He pulled away and found his way back to the tree lot. When He got back he picked a tree small enough to carry home.

“Thanks,” He said. “Merry Christmas.”

“Merry Christmas,” the old man returned, “I appreciate the help.”

He started back across the street toward the church and up the block. Just then he remembered the bill folded in his pocket. He crossed the street and stopped to look at the bill in the light from the church windows. When he unfolded the bill he looked down to discover that it was a one-hundred dollar bill.

He sucked in his breath. “Wow, imagine my luck tonight,” he thought.

Just then the church bells began to ring. At first he was startled by the sound then he remembered his prayer. Tears pooled in his eyes. He dropped to his knees in the snow in front of the manger scene and prayed for the second time in years.

“Oh. Wow. Thank you so much. Thank you. I don’t know what to say Baby Jesus.”

He laughed at himself and got slowly back to his feet looking up at the bell tower. The chimes echoed out over the city.

He put his tree over his shoulder and suddenly warmth welled up in his heart and ran all the way to the tips of his fingers and toes.