It’s the dead of winter. A big storm grazed us this weekend. I pushed a powdery couple inches off the drive, tended to the walks, fed the birds, and retreated to the corner of my warm room to write. The storm went on to grow into a huge nor’easter and pounded the New England states with snow measured in feet not inches, so I don’t know for sure why my mind travelled back to baling hay on a summer afternoon in northern Licking County on my grandpa’s farm, but it did.

We were up in the field over the hill past the west pasture making hay one summer afternoon many years ago. Some of the cousins were there. Jimmy and Paul and maybe the some of the girls. Grandpa was driving the tractor and a neighbor man was helping. Right from the beginning I thought he was too serious.

Grandpa had the good instincts to schedule the haying on holiday weekends–first cutting was often Memorial Day. Maybe my memory is faulty but second cutting seemed like it was often on July 4th weekend. This way the help was free and the whole thing was more of a festivity than it was a chore… well, for me it was. The neighbor man was treating it like an unpleasant task he needed to get out of the way was quickly as he could.

It was hot and dry on the wagon behind that baler. Chaff swirled up behind the baler and stuck to my sweat and clogged my nose. The hay was dry and scratchy. I was not used to farm work every day. But it was good fun for a kid from the suburbs who went from look-alike house to look-alike house every morning delivering papers for work and mowed flat boring lawns all summer.

I stood on the wagon in the open air on the top of the hill like a prince in a small kingdom pulling fresh air into my lungs and looking out on the beautiful blue and green world of central Ohio rolling off into the distance as far as I could see. My feet were wide apart, my chin was up, and my chest was square to the world. The house and barns were nestled in the valley below. White-faced Herefords grazed the hills between. It was good to be there in an honest, wholesome, secure place with people who loved each other.

Grandpa never seemed to hurry. He was about my age then, so that makes perfect sense to me now. His body worked but only when he was careful to pace himself. He was deliberate and thoughtful. He expected me to know what we were doing and think things through. He would sometimes quiz me, “Now, why are we doing this?”

“What are we doing next and why?”

I tried to please him but was often a few steps behind in my thinking. I assure you though, I didn’t always follow his tight, linear logic, my God-given human instincts were fully alive and I was drinking in every bit of the experience. I would remember every small detail decades later. I would actually write a book about it.

The Ford 9N pulled the baler, a noisy and complex contraption that grandpa seemed to piece together with coat-hangers and duct tape. It was not smooth-running, high-end farm machinery. It was a noisy contraption that rattled and growled seemed to reluctantly expel bails of hay in willful increments when it was pleased to do so. 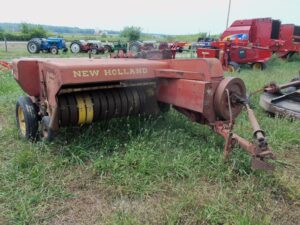 Behind the bailer was the wagon. One of the virtues of the bailer was a compartment in back used to store extra baler twine, tools, and a wonderful jug of sweet icy well-water. I don’t know if I have ever tasted water sweeter and more satisfying than the water from that jug on a hot summer afternoon.

We would stop the whole contraption for a rest and the thing would come to a wheezing hault and the hillside would grow beautifully silent save the sound of the birds and we would pass that water jug around. Heaven on earth.

Grandpa seemed to enjoy the banter and the laughter during the water break but the neighbor man frowned and puttered and tinkered with the equipment and muttered about the bales being to light and we needed to turn up the tension and we would be here all day if we didn’t tighten down the tension and make the bales heaver and move quicker.

Grandpa didn’t say anything for a while, but he did not seem pleased about the neighbor monkeying with his baler settings. After a bit of banter and a funny story or two, it was time to start up. He started the contraption up and we went back to work for a few minutes and then something went wrong and the equipment grew still and silent again.

The neighbor man seemed frustrated. “What’s going on with this baler,” He growled. Grandpa walked slowly back, got a wrench out of the compartment and made some adjustments or repairs and then he loosened tension back and he said, “This is old equipment. We can’t pin its ears back. Sometimes we just don’t have time to hurry.”

Grandpa’s words hung in the air, “We just don’t have time to hurry.”

Things were quiet. No one spoke. The tractor started. The power take off engaged, the baler whirred to life and we finished the job. Before supper the neighbor man went on home. Grandpa thanked him for his help. We emptied the wagon into the barn and within an hour we sitting in a circle of lawn chairs out under a shady Maple, eating fat grilled burgers, potato salad, and baked beans, and washing them down with huge classes of icy sweet tea. More laughter, more banter and after that, cold watermelon and more stories.

That night lying in the tall bed in the upstairs bedroom of the old farmhouse I could smell the new-mown hay on the moist night air coming through the open window. I thought about what my grandfather said. I knew it was true but I didn’t fully understand it. “We don’t have time to hurry.”

Maybe it was years before I fully understood what my grandpa meant. Maybe I’m still learning that lesson. When you fail to live deliberately, when you force things, when you push too hard, things and people often get broken or injured. Maybe that is what grandpa meant when he said to no one in particular that summer afternoon, “We really don’t have time to hurry today.” Maybe that is what Jesus meant when he said, “… Do not worry about tomorrow, for tomorrow will worry about itself. Each day has enough trouble of its own.”

I’m keying in this little memory deep on a cold winter night. I may never again ride a hay wagon on a summer afternoon or stack bales together in such a way that they will not slide off the wagon even on a steep incline. I may never taste the sweetness of icy well-water after an afternoon of stacking hay bales. I don’t know if I will ever see the old farm in Ohio again.

Grandpa died in 1981. Uncle Bill died this year. He joined two wives who are in heaven. I guess I’m one of the old guys now. Here are my words of wisdom: In life as in making hay, usually less tension will make you more productive. And you will hear the birdsongs. And you will notice the beauty of the blue sky and the green earth. And you will hear the timbre of a loved one’s voice and enjoy the music in their laughter. Maybe if you live deliberately with less tension you will appreciate the time you have with a loved one that will not be with you forever.

And we will know that sometimes we just don’t have time to hurry.

She quipped, “That’s because you were hurrying.”