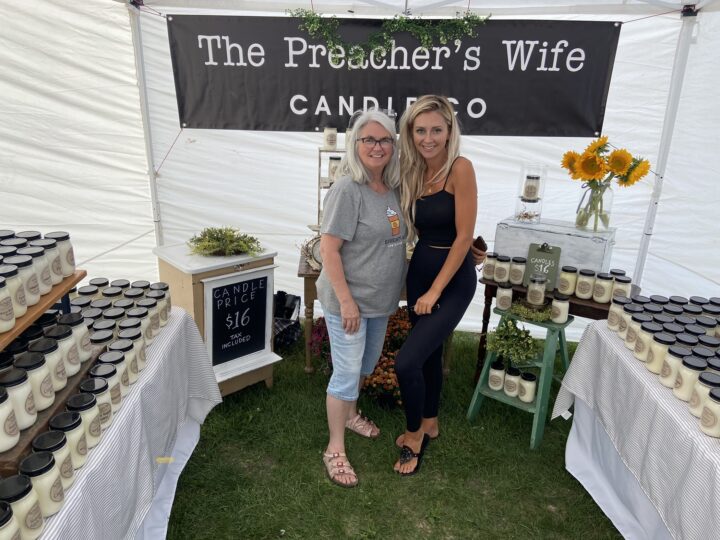 We were packing to leave. I made the two-hour drive to load the unsold candles. There were only a few boxes. I loaded them as quickly as I could, keeping my head down, working hard. I stashed all the implements and accoutrements required to display the candles in a fetching way on top of the boxes.

Whatever she did must’ve worked. The Preacher’s Wife Candle Company achieved record sales last weekend. She was in a happy mood as I wrestled her gear into the cars. We were almost done save the Herculean task of disassembling the canopy tent and packing it away when a man walked directly up to me looked me square in the face and said, “I’m gonna help you take your tent down.”

He goes, “No I need to turn my truck around right where your tent is so I’m going to help you take it down.”

In his voice I could hear the hills of Kentucky. I asked him where he was from.

“Kentucky,” he said, and I saw a hint of a smile on his face. Kentucky people are humble people except that they’re proud of being from Kentucky.

“Louisville,” he said, and he said it right, the way a native would.

I’m glad he came along when he did. I had driven the stakes down deep in the hard soil and couldn’t get them up. He was stronger than I and motivated to get my tent out of his way. He pulled them up

When your wife’s company name is The Preacher’s Wife Candle Company people always treat you with a special curiosity or deference. They realize if you’re with her you’re probably the preacher and they kind of look you up and down. Christians are kind. Everyone else is curious or they are openly skeptical.

In a few brief moments we worked together there was something I liked about him. You can do it but you really have to be a rogue for me not to like you if you’re from Kentucky. He had handsome lines in his face a good smile and bright eyes which he aimed directly at you as he spoke.

When we finished our task I helped guide his truck back into place. He shook my hand firmly and smiled and said, “I will see you in the rapture.”

My heart was filled with warmth for my new Kentucky brother.

Lois said, “I should know who they are but I don’t I think they’re on Instagram.”

Almost everyone in these shows has an Instagram presence. I think the whole thing is built on the notoriety that you get on Instagram. The next morning, lying in bed, she announced that she had discovered them.

When the lady walked up to me and offered her husband‘s help she said, “We have a 6 hour drive home.”

I could tell she was tired and wanted to get her big truck on the road. Watching her Instagram story, I realized they had trouble with a tire because they overloaded their truck and it took them over 24 hours to finally arrive safely at home.

I sent them a note of condolence as I’m sure many others did, I found myself secretly hoping that we do meet them sometime before the rapture.